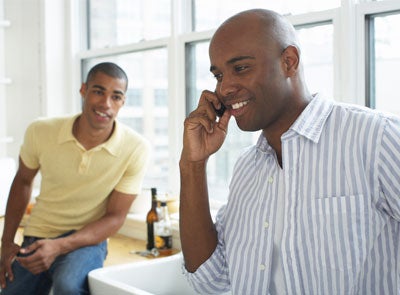 In 2008, bloggers Panama Jackson and The Champ launched VerySmartBrothas.com, which quickly became one of the Black blogosphere’s most popular destinations.

Each day, the two wiseguys entertain and enlighten thousands of readers with their musings on men, women, relationships and pop culture. I had the opportunity to sit down with them this week for a brief e-interview, and got a little romantic advice for myself… check it out!

ESSENCE.com: Since you’ve started writing about relationships, do you find that friends and family are constantly asking you for romantic advice?
Panama Jackson: Seeing as most of my family and friends either don’t use the internet or still refuse to acknowledge that Panama Jackson exists (mostly I get, “yo mama named you REALNAMEHERE, I’m gonna call you REALNAMEHERE too!”), I rarely get inquiries from those individuals. However, when I meet women and I tell them that I write for VSB and/or have a book, almost immediately I get bombarded with relationship questions and end up having lengthy discussions. I actually love it because I get to determine just how jaded this particular woman is ahead of time and can determine if I really even want her number. #winning

The Champ: For whatever reason, I’ve always been the relationship advice go-to-guy within my various circles of friends. It’s almost as if I’m rocking an invisible sign that reads “Please, please, please ask me whether it’s okay to take back your boyfriend after you caught him in bed with your niece’s math teacher. I’m begging you.”

ESSENCE.com: I need some advice. My boyfriend eats too fast. I work really hard on these very elaborate meals, like scrambled eggs and grits, and he wolfs it all down before I can sit down and join him. Does this mean he doesn’t appreciate me?
TC: Not only does he not appreciate you, his reluctance to savor your grits proves that he’s ashamed of his heritage, and his thumbing of his nose to your eggs proves that he’s a misogynist, a damaged-beyond-repair Black man who will surely leave you for your White secretary the first chance he gets. If you don’t actually have a White secretary, he’s going to hire one for you just so he can leave you for her. Beware.

ESSENCE.com: I know you guys have written about the Psychology Today article describing Black women as “less attractive.” Do you feel like it’s truly “open-season” on Black women? Or have a few particularly negative news stories simply gotten a bit too much attention?
TC: While I do think that Black relationships and Black women in particular have been under the spotlight, I think we are as much to blame. I mean, despite talk of some byzantine conspiracy to keep Black women down, the websites where these negative articles come from all pray at the altar of increased page views. And, they know that if they write something incendiary about Black women, it’ll be discussed, commented on, linked to, forwarded, and (most importantly) read ad nauseum. It’ll stop when we stop proving how easily it is to make money off of us.

ESSENCE.com: What’s the craziest email you’ve ever gotten from a reader?
TC: Besides random and unsolicited nude pics from a woman rocking a Zorro mask? I don’t know. Let me think about that for a bit.

ESSENCE.com: What are some of your favorite things about Black women?
PJ: I love the spirit of Black women. I know some truly Black women who have the best essence and aura, one that makes me want to be a part of it and be better so that I can be good for them. I love the loyalty that Black women have for their men. Which I know sounds self-important, but I have this uber strong sense of community. And I take being loyal to my women very seriously, so the fact that I never have to (well generally) question a Black woman’s loyalty and affections for the community and its men truly makes me happy. I also love the innate strength that most Black women possess. It might take a while for some of that to manifest itself, but it’s there. It’s always there.

TC: I’ve always been enamored with the softness of Black women. Everything from their smiles, their glide, their gait and their curves possess a certain softness, a certain grace, a certain femininity you just don’t see as often with non-Black women.

The VSB’s self-published book, “Your Degrees Won’t Keep You Warm at Night: The Very Smart Brothas Guide to Dating, Mating and Fighting Crime,” is available via Amazon!