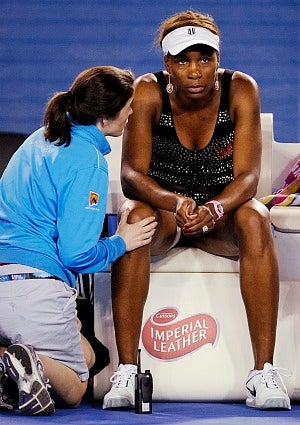 We won’t be watching Venus Williams charge toward victory this Australian Open. A muscle injury forced the Olympic Gold Medalist tennis player to withdraw from a Grand Slam singles match for the first time in her career.

During her third match against Andrea Petkovic of Germany, Williams served the ball before crying out in pain and holding on to her right side.

“Obviously, I just couldn’t play,” Williams later told the press. “I couldn’t move; it was too painful.”

After spending two days trying to manage an injury of her “psoas” muscle — which connects the lower spine to the hip — Venus says she hoped adrenaline would take over during the competition.

“A lot of times when you play, you get that adrenaline and that blocks pain,” she explained. “I just get enough of that today. I was hoping for some magic that I could recover.”

The 30-year-old former world champion expressed her disappointment saying, “This is just not how I envisioned my Australian Open being,” and said she is focused on, “being healthy and coming back, because I love tennis and I’ve got a lot of tennis in me.”

Williams had played 251 Grand Slam tournament matches and had never withdrawn because of an injury. We wish Williams a full and speedy recovery so that we can see her on the tennis court again soon.