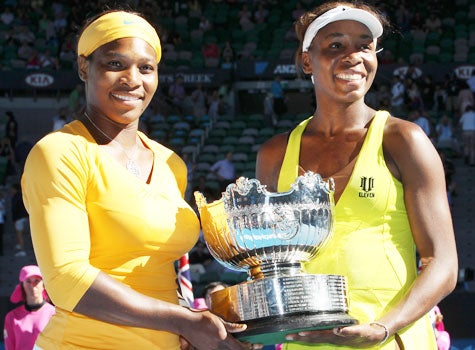 The Williams sisters proved yet again that, as a pair, they can dominate the court. Venus and Serena won their fourth Australian Open Women’s Doubles title, beating Cara Black and Liezel Huber with a 6-4, 6-3 victory. The pair broke Huber’s serve to open the second set Friday and succeed the match when they again broke Huber, ending it on Serena’s winning reflex volley, according to ESPN.com. The talented tennis players high-fived each other at the side of the court after the match. “I look forward to more titles,” Serena said, while Venus was oblivious of the win, “I actually didn’t know the score and I thought that it was 5-2.” The duo won the Australian title for the first time in 2001 and added championships in 2003 and last year. It was the 11th time the Williams sisters have combined for a Grand Slam doubles title. Read More