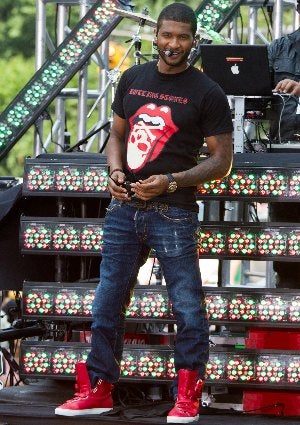 Usher says even though his relationship with Tameka Foster ended in divorce, he doesn’t regret his marriage to her. “I appreciate the relationship for what it was,” the Grammy Award winner told People. “Even though it didn’t work out, I’m glad we got together. I love her as the mother of my children; we just couldn’t be married.” Usher explained that his relationship with Foster began to break down after the birth of their second child. The two started to have conflicts over everything, including parenting styles and his hectic schedule. The 31-year-old singer said that he and Foster’s main priority is raising their children Usher V and Naviyd. “We had to put our issues aside and focus on raising them,” he told People. “There will never be another mother for my sons, and I’ll always be their father.” Usher commented on raising two rambunctious little boys saying, “Usher [V] I always in everything. He’s an instigator. He’s the one who leads his brother astray. I was like that when I was his age.” Luckily, he’s got his mother Jonetta Patton for back up. “She spoils them,” Usher told People. “She lets them do everything that she wouldn’t let me do.” The conversation wasn’t all about marriage and babies, Usher touched on his new EP “Versus,” which dropped last week, saying, “My music is about where I am at the time. In ‘Raymond vs. Raymond’ I was going through a lot of things, and it came out in my music. My marriage fell apart and I was suddenly a single father. But now, with ‘Versus,’ I’m singing about being a dating father.” It sounds like Usher is optimistic about finding love again. “I still believe in love,” He told People. “I believe in marriage. When I fall in love again, everyone will know. I’ll sing about it.”
Loading the player...