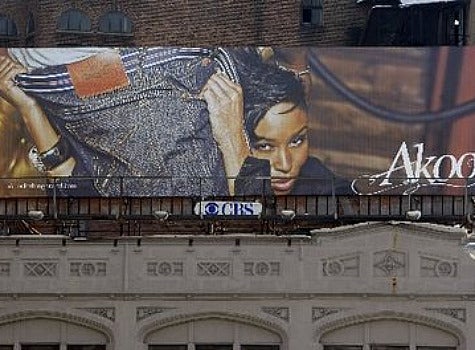 Due to the controversy that T.I.’s clothing brand Akoo Jeans caused with this sexually suggestive billboard featuring a woman bent down with her face close to the crotch of a man, an arm reaching between his legs pulling his jeans down, his hand resting on her head, the company released an official statement.
In an exclusive ESSENCE.com poll, we asked if you were offended by the Akoo Jeans billboard in Newark, NJ. Out of 1044 votes, 732 (69.3 percent) said Yes, while 321 (30.7 percent) said No.
Read the full story here. Statement issued from AKOO: “The AKOO brand has always aimed to inspire individualism and creativity. Our advertising campaign was not created to offend or insult anyone but to simply provoke dialogue and thought regarding male/female sexuality within urban culture. We hope that as more of the campaign is debuted, people will see the multifaceted personality of AKOO.”
Here’s what you had to say about it: Desiree: “Is it offensive? YES!” Tonya: “…Trifling. Whoever the marketing genius was that approved this for billboard usage should be shot. I used to work in marketing/advertising and know about the logistics that go into choosing which platforms to market your product with. This was just a poor choice all around.” The Alchemist: “I work in Newark. People over here have a lot worse everyday [stuff] to clean up before worrying about this ad.” Bonnie9609: “The ad is offensive — but we live in a sexual culture. Sex sells.“ Charise: “Yeah man… We all know that sex sells but this is so pushing it. I mean come on, there are sooooo many other ways to sell these clothes. I’m almost POSITIVE he will get more attention if he was to use himself in the ad. He’s a pretty fly dude and nothing sells your brand like your own image… Oprah being on the cover of “O” every month…. the billboard was really tasteless. Think about children that ride the bus past this everyday. Its just tacky.”
KyFemme: “I am raising 5 Black children. I can’t allow them to listen to the radio, watch TV, and now they need to close their eyes while I drive down the road. How do ‘you people’ expect me to protect them from your self destructive world?” Continue the conversation below. What do you think? Read More: