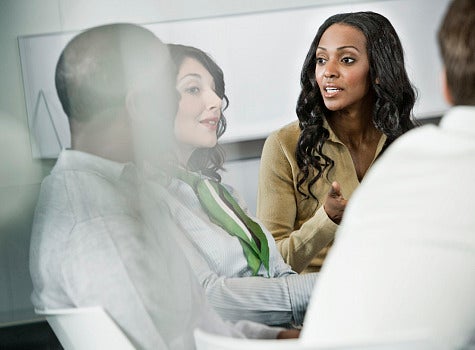 Here’s something to think about as you try to jump start your career in 2010: More often than not the simple fact that you’re a woman in the workplace means you’re treated differently than your male counterparts. You could be the hardest working go-getter in your office, but if you, like a lot of women, aren’t making your boss aware of your accomplishments, you may be sabotaging your own career prospects, says executive coach and author Ann Daly, PhD, who points out that overall women continue to be underpaid, taking home just 78% of the salaries that men do. If, for instance, a woman interviews for a position and asks for a higher salary than a male prospect with the same qualifications, she is more often viewed negatively while he gets what he wants, says Dr. Daly, because of double standards in the workplace. Here she lays out her top unwritten rules for women in the workplace so you know not to let them “sabotage your ambitions.” Men get the benefit of the doubt. Men generally get hired on their promise and women on their demonstrated experience. Men are usually taken at their word, while women get challenged more, required to deliver data and substantiation for their views. As a woman, you won’t get sufficient feedback. Professional development depends upon rigorous, comprehensive, ongoing feedback on your performance. How else will you grow and improve? According to the research, your male boss may not feel comfortable delivering that information to you, so you’ll need to be direct in asking for it from him and from other colleagues. A working mother’s commitment is assumed to be ambivalent. At worst, mothers are seen as potential flight risks from the organization, and therefore not worthy of any further investment. At best, mothers are denied plum travel and assignments, under the guise of benevolent protectionism, because “they won’t want to leave home so much.” Don’t let anyone else speak or decide for you. Actually, it is personal. In mid-career, at the point where everyone brings comparable talent to the table, it’s who you know, not what you know, that gets you promoted. As HR pros will tell you, you don’t push yourself to the top, you get pulled there. Men knew what they were doing when they invented the old boys club. Men are bred for self-confidence. From Little League to fraternities to the golf course, men’s lives emphasize competition. By the time they get to the workplace, they are seasoned competitors, with all of the self-confidence that comes from having successfully weathered both the thrill of victory and the agony of defeat. In order to assume that same level of self-possession (and entitlement), you have to design your own path to self-confidence. Women are rendered invisible until they demonstrate otherwise. If you want to be noticed, you’ve got to offer your ideas, approach a mentor, ask for the assignments, build a network, convey your aspirations, and communicate your achievements. It’s one thing to lose the game because you were outperformed, but it’s another thing altogether to lose because you were never in play. Women don’t take charge, they take care. Research has shown that both men and women will judge a woman who asks for a higher starting salary less favorably than a man with the same credentials asking for the same thing. Men are rewarded for their outspokenness, while women are expected to go along for the greater good. Women are different. Make no mistake, “different” never means “equal.” “Different” is code for “other.” And in any us-them situation, you know what happens to the outsiders. Defining women as “different” (whether it’s done by men or by women) serves to keep women positioned as outsiders, despite our increasingly dominant numbers in the workplace. Women make great worker-bees, but visionary leaders–not so much. Margaret Thatcher is often quoted as saying: “If you want something said, ask a man. If you want something done, ask a woman.” Unfortunately, that’s the kind of thinking that keeps the vast majority of women stuck in middle management, while men move forward into leadership roles. At a certain point, you’ve got to give up the grindstone to pursue vision and strategy. Ann Daly, PhD is an executive coach and the author of the forthcoming book, “Do Over! How Women are Reinventing Their Lives.”
Read More:

Resilia CEO Sevetri Wilson Shares A Key Tip On How She Raise...