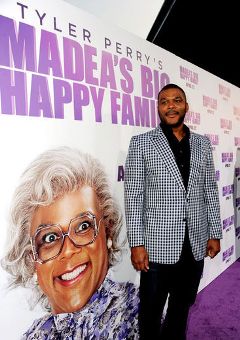 Tyler Perry’s latest film, “Madea’s Big Happy Family,” was a hit at the box office over the Easter weekend. The film took in $25.8 million at 2,288 movie theatres nationwide, making it the second highest-grossing film behind “Rio.” Nearly half of the earnings came in on opening day, with Friday bringing in $10.6 million in ticket sales.

Although all the Madea films have done well on opening weekend, “Madea’s Big Happy Family” is the lowest-earning of the Madea series, with “Madea Goes to Jail” having earned $41 million in 2009 and “Madea’s Family Reunion” with $30 million in 2006, according to BoxOfficeMojo.com. “Big Happy Family” stars Loretta Devine, Isaiah Mustafa, Lauren London, and Shad “Bow Wow” Moss.