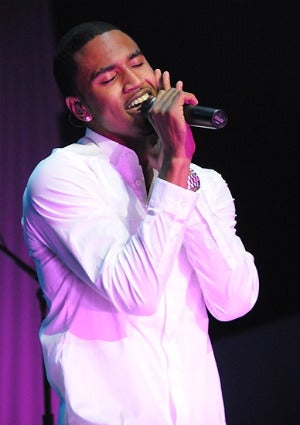 Not long ago, on a chilly night in Manhattan, we caught up with Trey Songz, one of our favorite sexy singers. The crooner was dressed in black dress pants topped with a svelte, collared shirt to shoot the commercial for his new Kodak endorsement partnership. The Trey-associated camera is called EasyShare and allows shutterbugs to not only take pictures, but upload them straight to social networks like Facebook and YouTube from the camera itself. If you’re like us, you know this direct connection could be extremely dangerous — Facebook shame, instantly — but it’s also pretty amazing considering we grew up thinking Polaroids were instant… ESSENCE.com sat down with Trey Songz, who recently finished the New York leg of his “Passion, Pain and Pleasure” tour, to talk about his involvement with Kodak as well as another endorsement where we can ogle him. “While I was on my ‘Passion, Pain & Pleasure’ tour, the Kodak guys showed me this camera that had this feature on it that lets you share your pictures immediately,” Trey said. “I’m always on the road and I’m very active with my social networks and my fans, so we worked out a great partnership. I’m also working with Rocawear.” And to prove it, the singer has an extremely tall Times Square billboard of himself posing in Jay-Z’s clothing. Now Trey is promoting his fourth album and believes the LP shows multiple sides of him as an artist. “On September 14, “Passion, Pain & Pleasure” my fourth debut album dropped and I think it’s my best album,” he said. “Coming off the heels of ‘Ready,’ with those songs still playing on the radio, it’s a step beyond where ‘Ready’ was for me and my audience. My lead single is ‘Bottoms Up’ and my second is ‘Can’t Be Friends,’ which is very emotional. I think anyone can relate to the situation where you’ve crossed the line between friendship and lovers and sometimes there’s no coming back from that. I wanted to release these two records to show how diverse this album is.” Recently, Trey admitted in the media that appealing to both the silly and romantic sides of his fan base is more lucrative than singing heartfelt R&B cuts like he did on his first two albums; 2005’s “I Gotta Make It” and 2007’s “Trey Day.” Remember “LOL :)” ? The single featured Gucci Mane and Soulja Boy telling women to text them, and while the song was a hit with younger listeners, the straight R&B crowd wasn’t impressed. But Trey stood his ground. “It’s after the flash and the glare that people appreciate what’s behind that,” he said with a serious look. “A lot of careers have shown that to be true.” “Throughout my career, I’ve had to cut corners and find a way to get where I am right now,” he continued. “Not to take away from any song that I’ve created, but it’s all been very strategic and this album is the one made with less inhibitions and more creativity. Being that I was so much more on the forefront of my musical success on the last album, I’ve had freedom on this album and a chance to really give more of myself.” But don’t take the Virginia native’s opinion to mean that he doesn’t love singing for us. He shared that early in his career, when there weren’t four-hour Kodak commercial shoots on the top of a breezy skyscraper, he was consumed with finding opportunities just like these. “I’ve always been busy trying to be busier,” said Trey. “I’ve never really had a break. This is what I prayed for, what I dreamed of. Now that I work much more often, I’m not going to run from it, I’m going to embrace it.”