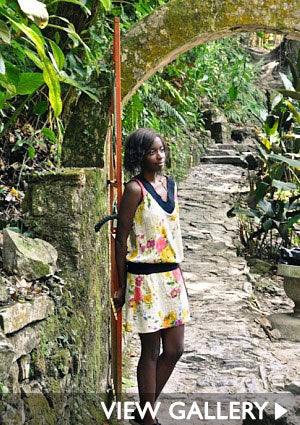 Fresh from two years spent living in Uganda, where she wrote for newspapers like The New York Times, freelance journalist Alexis Okeowo went looking for adventure (and new assignments) in South America. After a friend’s recommendation that she check out Mexico City, the Alabama native ended up falling in love with the city and staying way longer than her intended two week visit. In her travel diary the 25-year-old travelista shares her favorite places to check out south of the border, especially the best place for a Black girl to get her hair done in Mexico City. How she ended up in Mexico City: I was looking for a change in location. I first moved to Cuba, but I wasn’t able to stay. I had a friend in Mexico who told me how interesting it was so I decided to visit for a few weeks and I just fell in love with the place. Her first impressions of Mexico City: It was definitely a culture shock because I didn’t realize Mexico City was as modern and as cosmopolitan as it is. I get a lot of stares. I’m not used to standing out so much, so that’s taken some time to get used to. There is a native Black population in Mexico but they live mostly on the two coasts. People always ask if I’m from Cuba because there’s a lot of Black Cubans here. A typical weekend in Mexico City: A Friday night would be spent with a few friends eating traditional Mexican food and drinks at a cantina. If it’s a nice day on Saturday, which it usually is in Mexico, there’s a local market where you can always find gorgeous antiques and jewelry. A Saturday evening spent may be spent at a rooftop BBQ overlooking the city. On drinking tequila in Mexico: The funny thing is people don’t usually drink shots of tequila here. They’ll sip and take the time to enjoy it. What she recommends in Mexico City: Definitely visit the neighborhood of Coyoacan, which is a gorgeous Colonian-style neighborhood with cobblestone streets and really beautiful architecture. It’s also where you’ll find the home of Mexican artist Frida Kahlo. Then discover Chapultepec Park, a really huge park in the city, where you’ll find a great contemporary gallery inside. You can also bike or walk around the park. The “Centro” is the historic city center. It’s where you’ll find really grand architecture, art galleries, museums and a great nightlife. Where a Black girl gets her hair done in Mexico City: The first thing that comes out of your mouth whenever you see another Black person in Mexico is “Where do you get your hair done?’ I get my hair relaxed by a lady who does it from her house, and then I tell other friends and they go too, so it’s definitely word of mouth. When I go home to Alabama I stock up on whatever I can or I order stuff from the US. On eating authentic Mexican food: It’s ten times better here than what you thought it was and it’s nothing like TexMex or Taco Bell or any of those chains. Five things you should know about Mexico City: 1. It’s a three-hour flight from Atlanta. 2. The exchange rate is $1 to 13 pesos, which will buy you a coke or a coffee. 3. It has a thriving art and foodie scene. 4. Neighborhoods like La Roma and Condesa are considered some of the trendiest in the world and offer plenty of flea markets and sidewalk cafes. 5. Though May through October is considered the rainy season, Mexico City weather is fairly moderate all year round. Check out a few photo’s of Alexis’ travels in Mexico City.