The Today Show’s Deepica Mutyala has issued an apology via Twitter:

In addition the black model featured in the clip has now be identified as Malyia McNaughton and she spoke with The Cut’s Ashley Weatherford about the infamous Today Show segment. McNaughton told The Cut, in part:

“I totally understand the pressure that she [Deepica] was under, and I’m grateful for the fact that she wanted to be inclusive, and because the natural-hair movement is such a large segment. She is also a woman of color. I think that in the beauty industry we’re both people who are trying to break boundaries, and I thought that it was great that she wanted to show diversity. I commend her and applaud her for that, and that’s why I think people need to look at that angle as opposed to completely bashing her, because I feel like that closes the door for future opportunities. She will probably never work with a natural-hair model again, in regards to hair, and I think that that’s unfortunate, because that’s what we’re fighting against as both women of color.”

We’ve all been there — the moment you’re sitting in a hairdresser’s chair and you’re on the verge of crying because you know your hair looks a hot mess, but you have to smile and act like you love it.

Well, that seems to be exactly what went down during a segment called “One Minute Summer Hair” on the Today Show recently. A black model’s beautiful tresses were essentially manhandled by Deepica Mutyala, the show’s resident beauty expert. 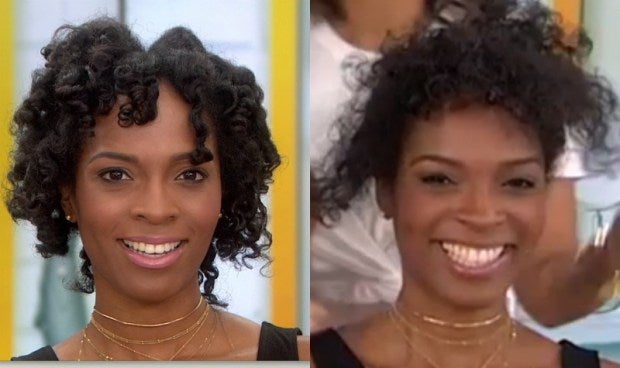 Mutyala proceed to aggressively place the model’s cute barrel curls into a high “side ponytail” and fluff out her bangs in a way that left us cringing.

The hilarious — yet  horrifying — video has gone viral and commenters are definitely offering up their reactions to this assault on the model’s mane.

Eek! Tell us what you think of the video in the comments section below.