Titi Branch, one of the co-founders of the successful natural hair care line, Miss Jessie’s, died Dec. 4. NV Magazine released an obituary that mentions her death was “an apparent suicide due to asphyxia”, but there is no confirmation of that.

With her sister Miko, Branch ran a popular New York salon since 1997, but the duo is most known for launching Miss Jessie’s. Although no official statement has been released by the family, news of Branch’s death and funeral spread via social media over the weekend, including a tweet from Miko. Branch helped spearhead the natural hair care line, which transformed into a collection that filled Target, CVS, Ricky’s and other retailers’ shelves. 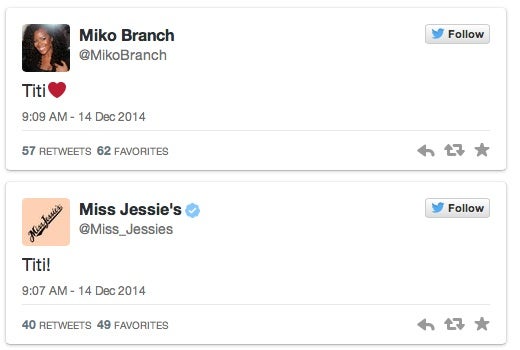 “We want to be part of their journey and experience while at the same time growing the brand and maintaining our integrity in the market,” Titi said on Missjessies.com. “When we get letters and emails from customers saying how our product and our message has changed their life and given them confidence to express their individuality—that’s what makes all the hard work we’ve put into Miss Jessie’s worth it.”

We’ll miss you Titi! Rest in peace and love.