Earlier this month, Time’s Up named former WNBA president Lisa Borders as its first CEO. The anti-sexual harassment organization chose Borders because of her multi-faceted background and career. On Tuesday the organization held a question and answer session at their Los Angeles office, and Borders passionately spoke about the recent confirmation of Brett Kavanaugh.

As the world watched the Kavanaugh hearings over the last couple of weeks, which Borders referred to as confirmation of the “world not being a great place for women,” she’s stepping into her new role at an interesting time. In an exclusive interview with ESSENCE, Borders delved deeper into her plans for Time’s Up, the need for elected officials who aren’t detrimental to women, as well as the organization’s relationship with #MeToo.

ESSENCE: So let’s just jump right in here. Was leaving the WNBA a hard decision for you?

Lisa Borders: It was not a hard decision when I looked at the work that needs to be done, and Time’s Up being the extraordinary platform that it is, I certainly love the W, everyone knows that I am the biggest fan of the WNBA and the players, the game at large. But this is a higher calling, to help not only women in sports, but to help women across the globe.

ESSENCE: Time’s Up is of course such an activism movement, the WNBA did catch a lot of flak when the players were fined for their Black Lives Matter t-shirts. What did you take away from that experience?

ESSENCE: What do you think are going to be some of your goals that you want to tackle first?

L.B.: Well, let me talk to you more about our focus areas as opposed to our goals. I will start officially on November 1, and I want to have the opportunity to speak with the women who started this movement, and with women who are coming to the movement every day. We will set our goals and our key performance indicators together, in a collaborative fashion, which is quite different than most organizations. But we do know that we’re going to focus in three key areas. They are culture, companies and laws. 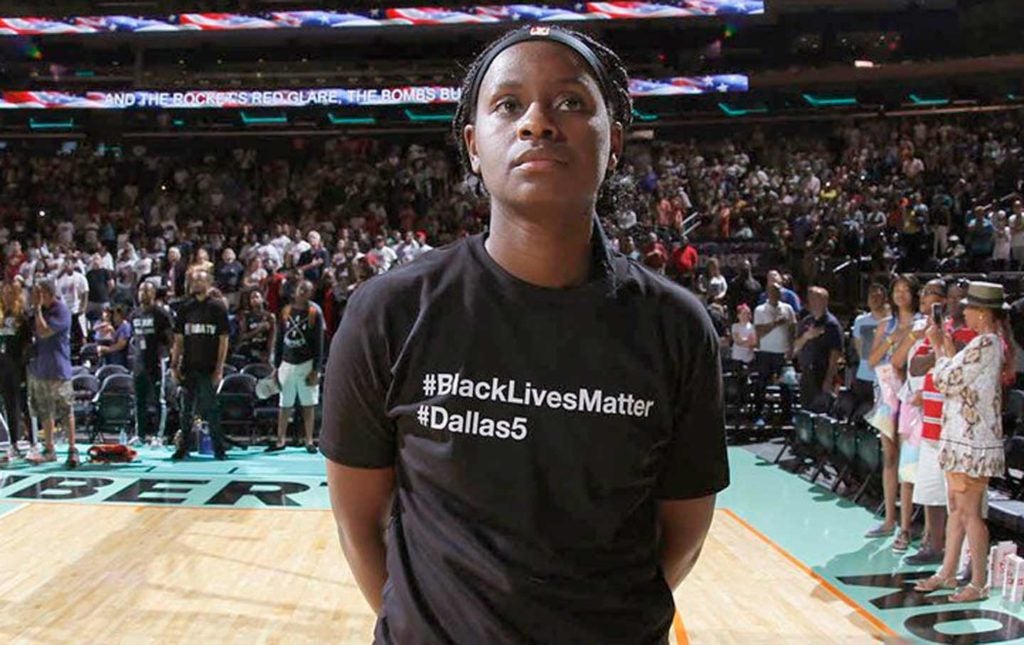 You spoke about the WNBA players and their T-shirts.  I would tell you that sports is an international language, and one of the things that everyone appreciates is that sports helps influence the culture. The society in which we live, the ideas, impressions, perspectives and points of view that people have. So we know culture is a critical element for changing the way that women are received and perceived. So that’s number one. Companies arguably have large blocs of people, not just women, but large blocs of people, in their organization. And we know that that is a very direct way to reach masses, large groups of folks in a very efficient way. So corporations, companies if you will, are a really good avenue or channel for us to share information and help change behavior.

And then finally, laws. We all understand, if we look back historically, in movements of yesteryear, whether it be the Arab Spring or the civil rights movement, we understand that changing public policy starts at the grassroots level, but you also need the grass tops. Our elected officials, who can then write legislation, pass legislation, that people that they represent are interested in having passed.

ESSENCE: And you just mentioned elected officials. Right now there’s the newly appointed Brett Kavanaugh. How do you think having the right elected official will affect the type of movement and other women coming forward with their stories?

L.B.:  You might recall that I formerly had the privilege of serving in public office as vice mayor of the city of Atlanta, and president of the city council. So I had the responsibility of running the legislative branch. The stakes could not be higher in today’s environment, whether we’re talking about the Supreme Court or Congress. Either branch, the Senate is certainly the long-view play, it is the deliberative body. And the House of Representatives is on point, from an operational perspective. So you are absolutely correct that we are interested, we at Time’s Up are interested in elected officials who can appreciate that women are smart, that women should have the right to determine what goes on in their lives, their bodies, their families. We do not need someone sitting on our shoulders dictating to us how we should govern our bodies, or govern our lives. We deserve to walk alongside our male peers with all the rights and privileges of citizens of the United States, and citizens of the globe.

ESSENCE: As far as being a Black woman and moving up the corporate ladder, what advice do you have to other women in the corporate world? Because there’s a lot of talk about the glass ceiling.

L.B.: So my first set of advice or counsel would be to do you. We for so long as women have been under the misguided impression that we must conform to the traditional approaches to problems, and I think that is not a good thing. And we have learned this over the last perhaps two generations, the last 50 years, but it is far better to be your authentic self and bring that person to work, to engage in whatever endeavor, In the corporate arena, whether it’s the mail room or the board room, so that’s number one.

Number two, I would invite more women into any environment. We know today that women are running for elected office, for example, in higher numbers than we’ve ever seen in the history of the world. So whether it’s going into the corporate setting or the public service setting, I invite more women to do just that. And then lastly, I would encourage women to change the approach. Everything that we do or that we are watching happen appears to be coming out of an approach that says we must be adversaries. And I do not agree with that approach right out of the gate. I really think that women bring a different dynamic to a situation. We tend to be much more collaborative, and much more collegial. Women have been oftentimes a calming force but a very deliberant voice to talk with different sides, or sides that have differing opinions. So I think women are really objective and fair arbiters when you have a difficult situation or conversation to be had. Today we often call that diplomacy, but we don’t seem to rely on it the way that we have historically. So I would like to offer women another invitation, that they be true to what they believe is the best approach to solving problems, and it’s not necessarily or ever putting out fire with fire.

ESSENCE: Will there be a relationship with the #MeToo movement as well?

L.B.: There is a relationship with the #MeToo movement. These are companion organizations, each one has their mission. Time’s Up was born on January 1 of this year. #MeToo came before that, obviously, with the brave women who gave voice to the pain of being assaulted or sexually harassed or mistreated in some terrible way. So we applaud and lift the women of #MeToo, we support that movement, and we appreciate that they have gone through incredibly, incredibly difficult situations. We at Time’s Up would hope that those situations never happen in the future. But we realize we can’t just hope that. We must not only be aware, we must take action to ensure that it never happens again. So our work on the sexual harassment front has come to life, most notably at the National Women’s Law Center, with our legal defense fund. You might recall that we have raised some $22 million on behalf of this body of work. So we are very much interested in not just talking the talk, but walking the walk and helping to put our money where our mouth is.

ESSENCE: What would be the one thing you want people to recognize about Time’s Up movement as a whole?

Sammie On Why He's 'Single But Not Eligible'

Show Your Pride With These Stunning Nail Designs