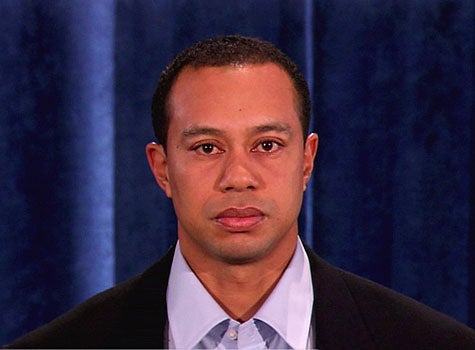 Tiger Woods came before a group of his close friends, colleagues, associates and family today at 11 a.m. to issue an apology for his infidelity to his wife Elin that turned into golf’s largest sex scandal. “I want to say to each of you, simply and directly, I am deeply sorry for my irresponsible and selfish behavior,” Woods said. Woods accepted full blame for his infidelity saying, “I was unfaithful, I had affairs, I cheated… I am the only person to blame. I stopped living by the core values that I was taught to believe in.” He continued: “I thought I could get away with whatever I wanted to. I thought I deserved to enjoy all the temptations around me…because of money and fame, I didn’t have to go far to find them.” Woods acknowledged that “the same boundaries that apply to everyone, apply to me” and apologized for hurting his wife, his children, his mother, his friends, his staff and the children “all around the world who admire me.” In his prepared speech, the golf star made clear that his wife Elin did not physically harm him on the November night of his accident in front of his home. “Elin never hit me that night or any other night,” he said sternly. “There has never been an episode of domestic violence in our marriage, ever.” Tiger continued his address saying that he is dedicated to getting help for his issues. In addition to the “45 days” of “in-patient therapy” that he has already received, Woods stated that he intends to go away tomorrow for more treatment. He also said that he is finding spiritual balance through Buddhism, which his mother taught him from an early age. He said that the faith, “teaches me to stop following every impulse and to learn restraint.” As far as getting back in to golf, Woods says he plans to play pro again, but is not sure when. “I do plan to return to golf one day, I just don’t know when that day will be,” he said. “I don’t rule out that it will be this year. I need to make my behavior more respectful of the game.” In his talk, Woods also urged the press to “please leave my wife and kids alone.” He ended with a petition to his friends and fans to “find room in your heart to one day believe in me again.” He then hugged his mother who was in the audience. Read More: