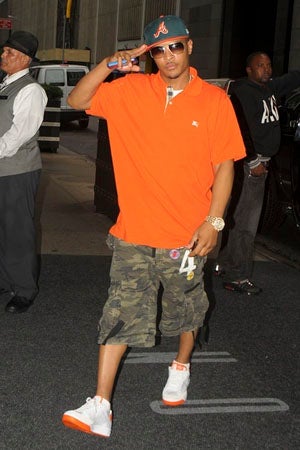 T.I. is more than an MC with songs like “Got Your Back” to make us groove; he’s also blossoming into an actor who can hold his own alongside veterans like Denzel Washington. In addition to recently marrying his long-time girlfriend Tameka “Tiny” Cottle, T.I.’s been traveling across the country promoting the bank heist thriller “Takers” with Idris Elba, Michael Ealy and Chris Brown, which premieres Friday, August 27. ESSENCE.com chatted with the Atlanta native about his “Takers” character, Ghost, negotiating his public and artistic personae and just what he’d be doing if he weren’t our hip-hop crush. .. ESSENCE.com: Has the transition from hip-hop to acting been easy? T.I.: As an actor you’re an instrument, as a musician you play instruments. Given the fact that music is your thoughts and your views, the music that you make comes from your heart and from your situation. On film, your personal views take a backseat to the story of the writer or the director. The transition is as easy as you allow it to be. If you have a real passion for it and you love what you’re doing and love the stories that you’re telling, it’s a piece of cake. ESSENCE.com: Where do you draw your acting inspiration? T.I.: This is my third film, and I have been blessed that on my first two I got to work alongside two of the greatest actors in the game. My first film “ATL” was produced by Will Smith and I learned the ropes from the biggest box office star in the world. The lessons I learned there I took with me to the set of “American Gangster,” where I got to share the screen and pick the brain of arguably one of the greatest Black actors ever, Denzel Washington. The advice that they gave me, I implement it into my approach to film at every opportunity. I’m trying to get to where they are and one thing Denzel told me is “don’t ever let the camera catch you acting.” ESSENCE.com: Why play in a thriller like “Takers” when you’re just returning to society for serving time for gun charges? T.I.: First, I would like for the separation to be made between art and life, from reality and entertainment. I don’t think I should be held any more accountable for the characters that I play in films like “American Gangster” or Ghost in “Takers” than Arnold Schwarzenegger is for playing “The Terminator.” No one questions Al Pacino’s intentions or values for playing “Scarface,” or Robert DeNiro for his role in “Casino.” What makes me any different? I’m an actor, I’m really just being used to tell the scriptwriter’s story. This is not T.I. or Clifford Harris’ message. ESSENCE.com: What do you like most about your “Takers” character, Ghost? T.I.: I like Ghost’s ambition; he refuses to take no for an answer. I don’t want to give the movie away too much, but I like that Ghost is looking to improve himself in every way, everything that he’s done, he’s looking to do better. He has some questionable characteristics, but it’s because of what Ghost’s been made to endure. I also can say that I like Ghost’s loyalty, he was loyal to those who he felt weren’t loyal to him in return. Do I like the decisions that Ghost chose to make? No, but I can say with a clear conscious that I don’t know what kind of mind frame I would be in had I been held to the same standards as Ghost. ESSENCE.com: Do you think “Takers” will help the public perception of you and co-star Chris Brown? T.I.: I really don’t know, I believe the public’s perception is what it is. No more than I think that if I would have done a role in “The Great Debaters” that it would have helped my image as a college student. You’re going to think whatever you decide to think about a person. I don’t think that even if Chris was to come out tomorrow with a romantic comedy where he swept the woman off of her feet in a “Pretty Woman” type film, it still would not take away from what people believe about him if that’s what they choose to think about him. ESSENCE.com: Just out of curiosity, what would you do if you weren’t rapping and acting? T.I.: Law. “Takers” premieres in theaters this Friday, August 27th.