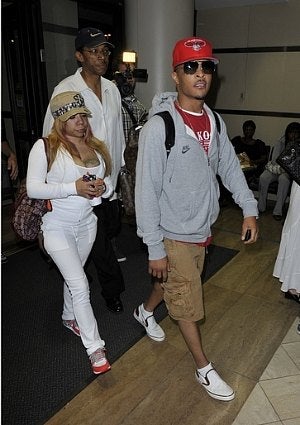 Last night, rapper/actor T.I. heard the phrase no person on probation likes to hear: “You’re under arrest.” The “Takers” actor and wife Tameka “Tiny” Cottle were arrested in West Hollywood after police smelled marijuana coming from their car, reports TMZ. This just weeks after the pair’s three-city wedding, and six months after T.I. was released from prison after doing time on a weapons rap.   Both were arrested and booked on felony possession of a controlled substance, which cops say included methamphetamines and ecstasy. Both were released bail on $10,000 bail. If this arrest qualifies as a violation of his probation, T.I. could be sent back to prison. T.I.’s new album “King Uncaged” is due later this month.