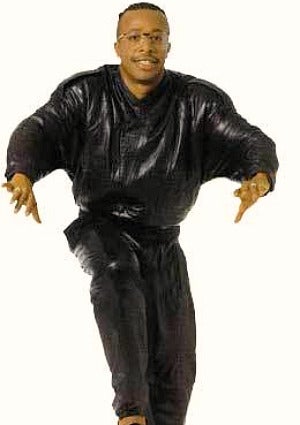 Everything old eventually becomes new again–in life, in fashion, in music and as Jamie Foxx proved on Sunday night, in dance, too. No sooner than Foxx broke out into The Running Man during his Grammy performance of “Blame It,” our live blog audience went wild. That made us wonder, “Where did that dance come from anyway?” Here’s what we dug up…

Originated in the late 80s, The Running Man was said to be the brainchild of dancer-turned-Laker Girl, Paula Abdul, who got her first, big break as Janet Jackson’s choreographer. At the time, Ms. Jackson was just coming into her own and gaining momentum on the charts with her “Control” album. We couldn’t take our eyes off of her and wanted to learn each step of every dance combination she performed in her videos, including The Running Man. By the time she took her show on the road, the entire world was dancing along with her. Who could forget her dance break at the end of the “Rhythm Nation” video a few years later?
Before the decade came to a close, MC Hammer would make The Running Man his own, complete with his now-signature baggie, genie pants and shiny, cropped jackets. Remember how he used to get down with Oaktown’s 357 and later, with a stage full of dancers, all in sync? Watch any hip-hop video from that time and you’ll notice that damn near everybody was doing The Running Man. A new dance craze had been born, but sadly, we knew its days were numbered once Vanilla Ice caught on.
That said, we’ve got to give credit where credit is due. Thanks Paula and Janet for the fly footwork, big up to MC Hammer for taking it all to the next level and a special shout-out to Jamie for resurrecting the 80s, if only for a few. Oh, and if by chance you forgot how The Running Man was really done, check the videos. Janet and Hammer never disappointed!
TOPICS: News

How Simone Biles Achieves Her Olympic Beauty Looks May Surpr...

Batwoman Is A Black Woman, Javicia Leslie Cast As The CW Lead