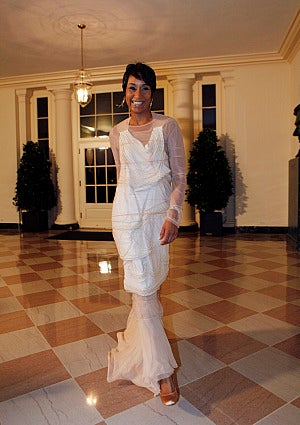 Desiree Rogers made the front page of the New York Times last week, in a profile on the rise and fall of the former White House Social Secretary, who stepped down from her position months after the now-infamous State Dinner party crashers incident. According to the NY Times, the crashers, coupled with Rogers’ inclination to the glamorous life, led to her demise. Rogers was criticized for posing in a photo shoot for Vogue and then going to New York’s Fashion Week with the magazine’s editor, Anna Wintour. Apparently she butt heads with Senior Advisor David Axelrod after appearing in WSJ Magazine dressed in a $3,495 silk dress with her ears sparkling in $110,000 diamond earrings (both provided by the magazine), while the country endured the worst recession since the Great Depression. Alexrod wasn’t too pleased with her referral to the President as a “brand” either. After the highly publicized State Dinner crashing, none of Rogers’ associates, including Alexrod, came to her defense. The article points to other Presidents who have brought their friends into the White House only to regret it–for Jimmy Carter it was Bert Lance; for Bill Clinton it was Harriet E. Miers, and for George W. Bush it was Alberto R. Gonzales. Rogers, 50, who met the Obama’s about 20 years ago through her then-husband who attended Princeton University with the First Lady’s brother, is the first African American Social Secretary the White House has ever had. She has been praised by many of her associates who say if it weren’t for the party crashers, Desiree Rogers would still be in the White House. Read More: