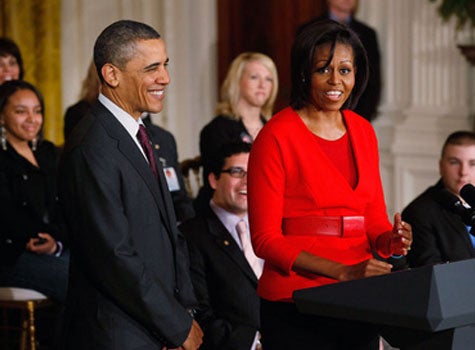 Today the President and First Lady came together for an important cause. They invited over 150 parents, kids, policymakers and others to discuss how America can end bullying in our schools…

“If there’s one goal of this conference, it’s to dispel the myth that bullying is just a harmless rite of passage or an inevitable part of growing up. It’s not,” said President Obama.

The First Couple highlighted alarming statistics that would encourage any parent to watch for the warning signs of bullying. “So consider these statistics. A third of middle school and high school students have reported being bullied during the school year. Almost three million students have said they were pushed, shoved, tripped, even spit on. It’s also more likely to affect kids that are seen as different, whether it’s because of the color of their skin, the clothes they wear, the disability they may have, or sexual orientation,” said the President.

During the course of the conference, several young people were highlighted for making a change at their school. One student went so far as to start a club of sorts that tracks bullying rates.

Today’s conference is a keen reminder that bullying isn’t just a kid problem; it’s a nationwide problem. Here at ESSENCE.com, we ask — what will you do about bullying at your kid’s school?