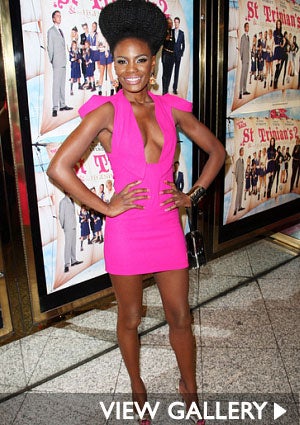 Music and fashion have long made for an explosive, potent twosome. After one look and listen to the UK’s The Noisettes, it’s obvious that when met harmoniously in the middle, the twosome can be mind-blowing. The trio consisting of guitarist Dan Smith, drummer James Morrison and singer and bassist Shingai (shin-guy, “persevere” in the Zimbabwean Shona language) Shoniwa blend psychedelic, indie-rock, jazz, electro punk, blues and pop influences to create a sound that is uniquely their own. With two critically-acclaimed albums under their belt, “What’s The Time Mr. Wolf?” (2007) and “Wild Young Hearts” (2009), The Noisettes, who came together back in 2003, are reaching rock ‘n’ roll success on their own terms. In addition to being the poster children for the mixing of musical genres, The Noisettes have introduced the world to a one-of-a-kind, ferocious front woman who approaches fashion with the same gusto and non-conformist manner in which she approaches music. To say that Shoniwa steals the spotlight from her bandmates when performing live is an understatement. That’s not to say Smith and Morrison are simply background musicians to Shoniwa; in fact both Morrison and Smith are talented musicians in their own right that bring a great deal to the table. Nevertheless, it’s almost impossible to keep your eyes off Shoniwa during one of their live shows, even if you try (and we did!). Captivating an audience comes naturally to this English-Zimbabwean. First, there’s her beautifully melancholic voice which hints to a twisted melange of Billie Holiday and Beth Gibbons of Portishead. Second, and perhaps the biggest reason that sets Shoniwa apart from the slew of great singers out there, is her commanding stage performance. Before seeing The Noisettes live, we hadn’t seen anything like it. Shoniwa, usually bare foot and often sporting war paint on her face, goes the distance to keep her audience entertained. She climbs up the walls, literally, grabbing on to whatever she can while her other hand is tightly wrapped around the mic. She’s played her guitar with a loaf of bread and the former gymnast has even broken out into cartwheels, while singing, without losing a step. She’s also been spotted singing hanging from a rope ladder suspended from the ceiling! It’s like watching her have an outer body experience. “I love dressing up. I’m from a huge African family and grew up in a really colorful place. The way I dress reflects my environment and wanting to take people into a fantasy world for half an hour,” Shoniwa has said. This takes us to the third reason why Shinowa rocks and that’s her extravagant, playful, sexy and uber-cool personal style fit for a rock star. We’ve developed a serious girl crush on Shoniwa over the years. The fashion powerhouse is all about experimenting when it comes to her fashion choices similar to her fashion muses Jimi Hendrix, Kate Bush, Josephine Baker and Grace Jones. Just like her music, Shoniwa’s style is the result of a medley of inspirations from the 80’s to ethnic garbs always in high-wattage hues. She loves showing off her legs in futuristic miniskirts, catsuits, dresses and bodysuits when she’s bouncing off speakers during her fearless live shows. She manages to pull off the craziest looks with such aplomb, while anyone else would just look ridiculous in them. Too much is never enough for Shoniwa who usually finishes off her eye-catching outfits with piles of accessories. While she’s made a name for herself in the UK as a fashion red carpet star wearing hot new designers like David Koma and Jean Pierre Braganza (even Topshop specially designed outfits for her to wear to the V Festival last summer), Shinowa’s fashion cred is steadily growing here in the states where her daring looks has won her cult fans. Take a look at Shoniwa’s cheeky outfits and get ready to feel inspired to be braver when it comes to your style. Read more: