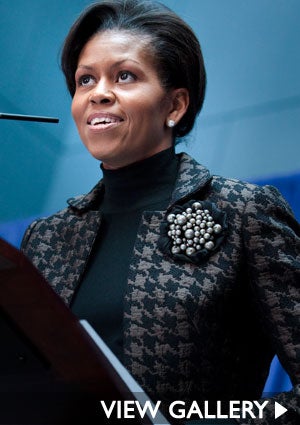 In an exclusive roundtable discussion, Michelle Obama talks about motherhood, advocacy and race in the White House

First Lady Michelle Obama says she can’t believe it’s been a year since she and her family moved to Washington. But as she strides confidently into the White House Old Family Dining Room on Wednesday morning, wearing a red sheath dress and brown knee-length boots, she appears to be perfectly at home.

“I was talking to somebody about what I was thinking this time last year,” she told reporters from seven media outlets, including ESSENCE, after taking a seat at the dining table where she and the President host small dinners. Mrs. Obama described how, back then, she was just worried about her daughters adjusting. It wasn’t until March, when Sasha and Malia announced liking their new home, that she could relax into the role of First Lady. “That was the first time that I was able to breathe a sigh of relief, despite anything that had happened up to that point,” she said. “Hearing that they were okay with this move was like the beginning.”

Reflecting on her first year in the White House, Mrs. Obama says she is pleased with the initiatives she took on, more than 200 events including growing a White House garden with local schoolchildren and talking about nutrition, visiting six military bases to advocate for military families and launching a White House mentoring program for teenage girls. “If there is a program that speaks fundamentally to who I am it is [the mentoring] program,” she says of the 16 Washington-area girls who she and other White House officials meet with once a month. “The notion that they’re preparing to meet with the President, and that they can sit down and address anyone, is just that kind of intangible confidence that can really push kids from mediocrity to fabulousness.”

Still, she says there is much more she wants to do.

“I want to leave something behind. That’s the legacy I want,” she said, explaining her desire to create some kind of measurable, statistical change in the country. Childhood obesity in particular will be a major focus this year, and next month she plans to kick off a national, administration-wide effort to make children healthier.

During the wide-ranging conversation Mrs. Obama touched on controversial remarks by Senate Majority Leader Harry Reid, in which he said voters would embrace Barack Obama in 2008 because he’s “light-skinned” and has “no Negro dialect.” She downplayed the recent furor over the statement. “Harry Reid had no need to apologize to me, because I know Harry Reid. I measure people more so on what they do rather than the things that they say.”

On the general subject of race, and her place in history, she was more forthcoming. “It’s not something I take lightly. I’m proud of the fact that I’m the first African-American First Lady, and my goal is to make sure that I’m representing the entire country and doing myself and my family and my community a service as I do it,” she said. She rebuffed the idea, however, that her presence in the White House makes us a “post-racial” nation that’s gotten all our issues solved.

“We’re still new at this. The Civil Rights Movement happened in my lifetime. … When you look back on my history, and finding out that my great-great-great grandmother was actually a slave, we’re still very connected to slavery in a way that is powerful,” she said, adding that we must continue talking about race, along with increasing our exposure and connections to different people. She does not, however, believe that President Obama has a special role to play. “I don’t think the President is more or less responsible for encouraging these conversations than each and every one of us when the time presents itself. But we also shouldn’t overplay stuff when we don’t have to.”

When asked what she’s most proud of, out of everything in the past year, the First Lady returns to “Mom-in-Chief” mode. “You know, I’m happy that my kids are sane,” she said. “I’m happy that when I look at my daughters, I recognize them as the kids that they were before they got here. My hope is that in here years, I can say the same thing. But so far so good.”