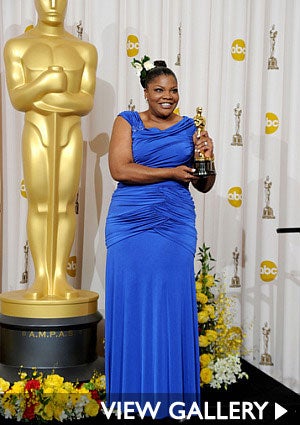 The big clean-up at Hollywood & Highland is already underway, but the energy emanating from last night’s Academy Awards can still be felt all over Tinseltown. Our best and brightest hit the red carpet in their black-tie finest as this year, we were well-represented on the nomination ballots. How exciting was it to see Mo’Nique and Gabourey, Lenny Kravitz and his daughter, Zoe, Nick and Mariah, Zoe Saldana, Paula Patton, Anthony Mackie, Lee Daniels as well as presenters Oprah Winfrey, Queen Latifah and Tyler Perry walk the carpet? Very. Though the Best Actress statue was awarded to Sandra Bullock, we have a feeling that first-time nominee, Gabourey Sidibe, is still feeling chills after hearing the moving speech that Oprah delivered on her behalf. The Best Director and Best Picture awards went to Kathryn Bigelow and “The Hurt Locker” (big up to Anthony Mackie!”) but that didn’t mean that the cast and crew of “Precious: Based on the Novel ‘Push’ by Sapphire” went home empty-handed.   Screenwriter Geoffrey Fletcher was the first of the “Precious” team to pick an Oscar for Best Adapted Screenplay. The script was his first to make it to the big screen, so his win was even more rewarding. Ironically, Fletcher, whose work revolves around crafting words, seemed quite at a loss for words when he accepted his award. Mo’Nique would win the second of two of awards bestowed upon “Precious.” Once her name was called for Best Supporting Actress, she took a deep breath, kissed her husband, Sidney, and her co-star, Gabourey Sidibe, and began taking slow, careful steps to the stage. The entire audience at the Kodak Theater rose to applaud. And for those who questioned Mo’Nique’s choice of color and flower on Facebook and Twitter, she offered the most heartfelt explanation for her attire. “The reason why I have on this royal blue dress is because it’s the color that Hattie McDaniel wore in 1940 when she accepted her Oscar,” she told reporters backstage after her big win. “The reason why I have this gardenia in my hair? It is the flower that Hattie McDaniel wore when she accepted her Oscar. So for you, Ms. Hattie McDaniel, I feel you all over me and it’s about time that the world feels you all over them.” Well said. We feel you, Mo’Nique, and we feel Hattie, too. One last thing. We are still trying to figure out what happened during that speech between filmmakers Roger Ross Williams and his partner, Elinor Burkett, who completely, rudely, cut him off while he was accepting their award for Best Documentary Short Subject for “Music by Prudence.” What do you think? Read More: