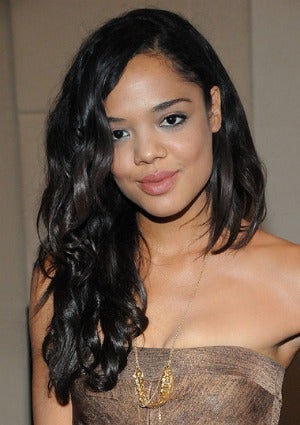 She’s starring in one of the year’s most anticipated movies — Tyler Perry’s “For Colored Girls” — and fresh-faced actress Tessa Thompson realizes she’s on the brink of a huge moment, an Oscar-worthy moment. “The gravity of it all is hitting me now,” says the 27-year-old Los Angeles native, speaking on all the Oscar buzz already surrounding the movie. “I’ve learned by looking at Tyler’s track record; he makes movies, and lots of people see them.” Thompson, the youngest lead in the movie, spoke with ESSENCE.com about how she convinced Perry to cast her in the film, and finding a piece of herself in her on-screen character, Nyla. ESSENCE.com: Did you know about the original play by Ntozake Shange”? TESSA THOMPSON: I did, I’ve known about the book for quite a long time. I came across it when I was a little girl and I kind of flirted with an idea I had at various times in my life when someone would be like, “Could you do part of this for a reading?” or “We’re going to do a Broadway revival, could you come to New York for a couple days?” It’s been in my consciousness for a long time. ESSENCE.com: How did you find out about this particular project? THOMPSON: I heard the stage play fell apart and it wasn’t going to happen, then I heard they were going to adapt it into a film and Tyler Perry was at the helm. I called my agent right away and said, ‘Is there any way we can do this?’ and he said, “It’s been cast already.” I think then Tyler was still in talks with people of note, and so it went away for a while. Then it came back into my life in a series of serendipitous and very fortunate events where I had the opportunity to send a tape to Tyler directly, saying, ‘I should be in your movie and here’s why’ — and I did the two monologues I did in the film and much to my surprise and great happiness he said, “Okay.” ESSENCE.com: You play a young woman who has to go through a traumatic situation. How did you find the character within yourself? THOMPSON: I don’t know. I think Nyla just felt very close to me, I have a little sister that age. Because of her and wanting to protect, and my relationship with her, which is quite close, I feel really close to what those feelings are and dealing with them. I also think it’s in the context of working with all of these women who are so talented and experienced and successful. It wasn’t hard to find a place where I’m like ‘I don’t know everything.’ I think that’s what is so endearing about watching a young person navigate all the various struggles that life presents you. ESSENCE.com: Did you think this was going to be such a big production? There’s already Oscar buzz! THOMPSON: No, I think my initial feeling sensed that. I’ve learned by looking at Tyler’s track record; he makes movies, and lots of people see them. But I think my initial reaction, knowing it was him and knowing the people that were in it… the gravity of it all is hitting me now. ESSENCE.com: We don’t know much about you? Who are you? THOMPSON: [laughs] I’ve been working in both television and film for about five years and as far as that’s concerned, it’s relatively new. I was born and raised in Los Angeles. I split my time between the west coast and the east. ESSENCE.com: You were familiar with the turf when you were filming in Harlem? THOMPSON: Yes, absolutely. I’m sort of obsessed with Harlem. Just its history. My father did the music for a play called, “The Huey P. Newton Story” and they did a lot of work in Harlem. So as a little girl, I spent a lot of time in Harlem Library. My copy of “For Colored Girls” I’ve had since I was a little girl. “For Colored Girls” opens in theaters this Friday, November 5th.