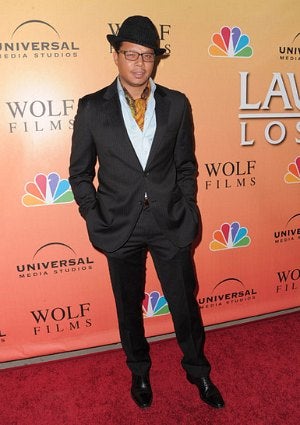 The “Law and Order” franchise is about to get too hot to handle now that Terrence Howard joins “Law and Order: Los Angeles.” Fresh from playing Nelson Mandela in the upcoming biopic, “Winnie,” the Oscar-nominated actor spoke with ESSENCE.com about the inspiration for his character, Assistant District Attorney Joe Decker, and getting tips from “Law and Order” vets, African-American actors Jesse L. Martin and S. Epatha Merkerson. On why he took the role: “I had just finished playing Nelson Mandela. The most important part of him is his legal ability, and his appetite for moral rightness. When we finished the movie, I wasn’t finished with being a warrior… If I could work on something that was that honest, something that was that challenging, and something in such great association — that was my dream.” On what inspired his character: “I based a lot of him on Thurgood Marshall. Thurgood had a huge soft spot, but his belief in principle outweighed any amount of unnecessary mercy. He believed in being long-suffering. My character doesn’t want people to be found guilty — what he’s hoping is that the defendant will prove their innocence. He just cares about the truth, by whatever means, he just wants the truth. I love that about him, but sometimes he can forget to play. I wish that he would lighten up, but everything goes straight to his heart. On calling up “Law and Order” vets S. Epatha Merkerson and Jesse L. Martin to get some tips: “Me and Jesse have been auditioning together since we were 18, so he walked me through the do’s and the don’ts.” Executive Producer Rene Balcer: “I guess he got a thumbs up from [Epatha] that he’d be treated well as an actor.” “Law and Order: Los Angeles” airs Wednesdays at 10pm on NBC.