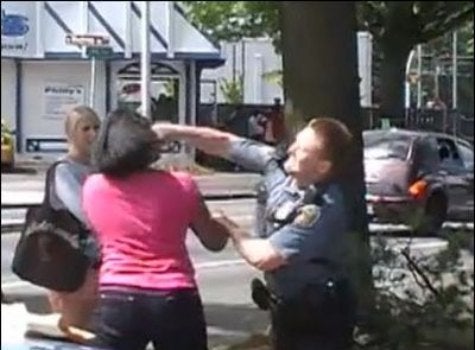 The Seattle teenager who was punched in the face by a policeman has privately apologized to officer Ian Walsh for the altercation on Friday June 17, according to The Grio. On a cellphone video, the 17-year-old African-American girl is seen shoving Walsh before he strikes her in the face. The girl was separately charged with third-degree assault, punishable by 30 days in detention. Now that the teenager has said she’s sorry to Officer Walsh, when is he going to apologize for clocking her in the face with his fist? Just a thought. The city’s Black police officers are standing behind their fellow law enforcer. According to the Seattle Medium, The Black Law Enforcement Association of Washington (BLEAW) publicly denounced the actions of the young woman and her friend who Officer Walsh was attempting to arrest for jaywalking. Furthermore BLEAW stated that Walsh’s actions were not racially motivated and that the punch was justified. Hmmm.
By now you’ve most likely watched the video. What do you think? Was that punch justified? Is hitting a woman okay?