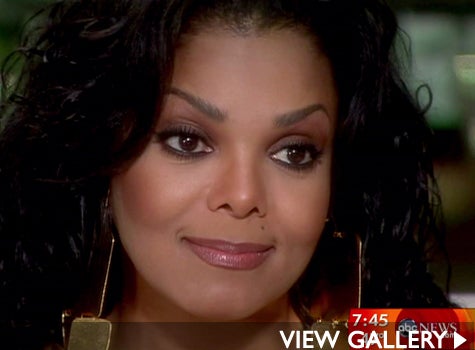 Last night, ABC aired Robin Roberts’ much buzzed about interview with Janet Jackson. The two spoke about her brother Michael’s death, her weight, her relationship with JD and what’s coming up in her career.
Here’s some of what she had to say:
On Jermaine Dupris: “I adore him, and we’re still very good friends to this day … that’s all I’ll say.”
And her “booty”: “Now I know there’s nothing wrong with it, thank you to Jermaine Dupris … for loving me the way he does, and making me feel very comfortable with myself … I’m fine the way I am. There’s nothing wrong with me.”
About the Propofol found in Michael’s body: “That was a shocker to me. None of us knew to that extent. That’s serious; that’s heavy.”
On Whether Dr. Conrad Murray is responsible for MJ’s Death: “He was the one that was administering. I think he is responsible.”
On MJ’s high-grossing film ‘This Is It’: “I don’t know if I ever will, but I definitely can’t see it right now…Too soon. Too hard.”
On coping with her brother’s death: I needed to get back to work. It helped me to get through it. I was able to put a lot of my focus someplace else.”
Forty-three-year-old Jackson has been working hard. Her new album ‘Number Ones’ dropped yesterday, she’s starring in Tyler Perry’s ‘Why Did I Get Married Too,’ coming soon and she’s working on a book, ‘True You.’ ______________________________________________________________
UPDATE 11/18/09: In her prime time interview with ABC’s Robin Roberts, “Janet Jackson says she and her family tried to stage drug interventions “a few times,” but were “unsuccessful.”