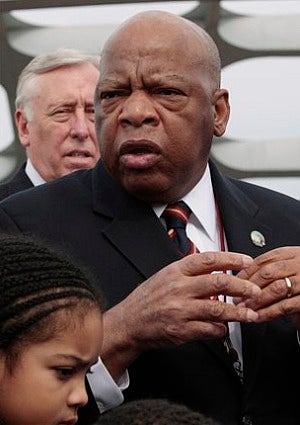 Tea Party members protesting health care reform took their mixed message to Washington D.C. this weekend. Things got even uglier than they already are when they began shouting  racial and homophobic slurs at members of congress. Their vitriol towards the Congressional Black Caucus, in particular, included racial epithets like the “N-word” directed at Civil Rights icon and Georgia Rep. John Lewis and Rep. Andre Carson of Indiana. Meanwhile Massachusetts Rep. Barney Frank was called a f____. “I have heard things today that I have not heard since March 15, 1960, when I was marching to get off the back of the bus,” South Carolina Rep. James Clyburn told the Washington Post. As Tea Party and Republican leaders rush to do some damage control by issuing statements rebuking the actions of those few individuals in Washington D.C., it comes as no surprise to the rest of us that a party made up of mostly White faces (in 2010!) would reveal it’s true colors and show the extent of it’s hate towards, who else, President Barack Obama. Sure they will call it an isolated incident, but we knew it was coming all along. Because after all, we know what the real debate is about, and it’s not health care. Read More: