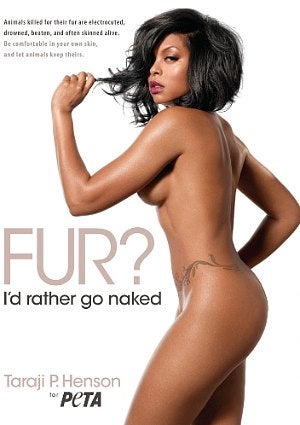 Taraji P. Henson is the latest star to bare all for PETA. The 40-year old ESSENCE cover girl says she used to wear fur but HBO’s “I Am An Animal” changed it all. The documentary depicts how our furry friends are skinned alive for the sake of fashion…

On a giant billboard in Los Angeles and New York flyposting you can catch a nude Henson covering her goodies for the anti-fur campaign. “Fur? I’d Rather Go Naked,” is sprawled along the bottom of the advertisement.

“When I realized what went into — not just, we’re not just even talking about a full-length fur coat, I’m talking about just, like, fur on your gloves or your jacket… it ripped my heart out. And as humans, we have control. What if someone said, ‘Black skin is the new fur'” says Henson.

“You don’t have to kill an animal just because you want to be hot and fly. And I really stand by that,” added the Karate Kid star.

Whether you agree or disagree with PETA, Henson is undoubtedly making us think twice about fur.
Loading the player...