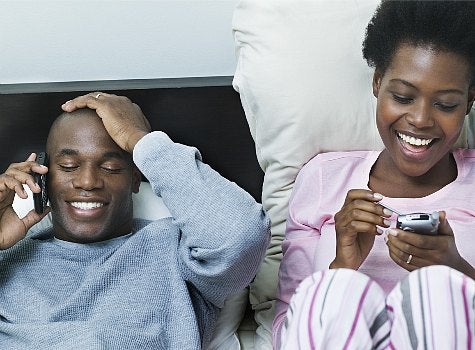 When it comes to cellphone use, Black people surely have the gift of gab. According to new data from Nielsen, a consumer data and trend-tracking agency, Blacks spend an average of 1300 minutes talking on their cellphone per month. That’s nearly twice the average for Whites (647 minutes) and a little more than Hispanics (826 minutes). Blacks and Hispanics also send the most text messages per month; an average of 780 for Blacks and 767 for Hispanics. Whites send an average of 566 text messages. Women aren’t getting left behind either. The study found that women spend 22% more time talking on cellphones (856.3 minutes a month compared to men’s 666.7) and send or receive an average of 601text messages. So what are the reasons for high cellphone usage among Black people? The Associated Press looks to recent statistics from the National Center for Health Statistics which found that Black people were less likely to own a home phone and more likely to use it to connect to the Internet (mostly because of poor adoption of home broadband). Regionally, Southerners were also more likely to spend time on cellphones. People in Mississippi, Texas and Florida spend an average of 800 minutes on the phone every month. Nielsen says it conducted the study by analyzing the cell phone bills of nearly 60,000 people. See a breakdown of mobile phone usage by race, here.