If you didn’t catch the premiere of Beyonce’s visual album Lemonade on HBO, you might still be wondering exactly where the meaning behind the project came from.
Beyoncé Debuts ‘Lemonade,’ Twitter Reacts Perfectly
In the one-hour short film, the song lyrics in the new material initially takes viewers on a journey through the mind of a devoted wife who is fed up with her husband’s indiscretions and frustrated after doing everything she can to get through their issues to no avail. Each song captures s different feeling. From calming lyrics like “I can taste the dishonesty, it’s all over your breath,” to raw ones like, “How did it come down to this? Scrolling throughout yo call list? I don’t wanna loose my pride but, I’mma f**k me up a b***h,” Bey covers just about every emotion you go through when your relationship hits a rough patch.
Beyhive Members Rejoice, Beyoncé Just Dropped Her Sixth Studio Album ‘Lemonade’
As the film nears it’s end, the emotional tone of the song lyrics begin to shift to address other life factors and world issues that ultimately tend to contribute to the overwhelming feeling of hopelessness women can feel within the confines of the relationship. 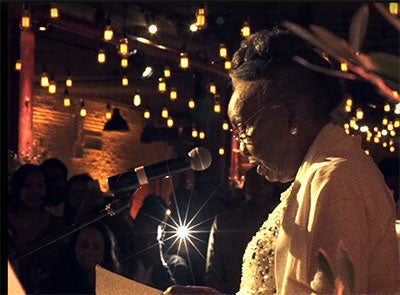 As this realization is made, there’s a scene in film that features Jay Z’s grandmother Hattie as she addresses partygoers at her 90th birthday. She recites the quote “I was served lemons, but I made lemonade,” thus bringing the album title’s meaning to life.
Get it? Got it? Good. Now, excuse us as we go get back in Formation.