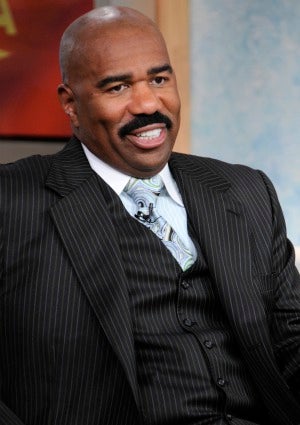 Talk show host and comedian Steve Harvey recently inked a deal with Real Housewives of Atlanta star, Miss Lawrence. The feisty hairdresser will join Harvey on “The Steve Harvey Project”, a recap of his radio show that airs on BET’s Centric TV.

The stiletto-strutting stylist and singer will host a segment called, “Spilling the Tea,” where he’ll dish out the latest on celebrity gossip, fashion, and beauty. Miss Lawrence, who released his underground pop hit  “Closet Freak” last year, said he looks forward to working with Steve Harvey. “I’m so excited…I’ve found the chemistry and talent between us to be really natural,” he wrote in a statement.

Be sure to catch his “Spilling The Tea” segment Tuesdays and Thursdays on BET’s Centric TV.