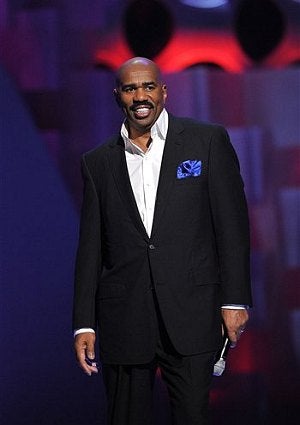 Gospel and comedy fans are about to experience the best of both worlds. Today, radio host Steve Harvey announced that he would be bringing gospel star Kirk Franklin along for a comedy tour beginning in March 2011. Like his previous tour, “Don’t Trip…He Ain’t Through with Me Yet,” Harvey is challenging himself to keep his act clean, so Franklin’s gospel fans won’t be offended. Put it this way, “Steve brings the jokes and I bring that Jesus,” said Franklin.   Harvey recently began hosting “Family Feud” and next month will release a follow-up to his bestseller, “Act Like a Lady, Think Like a Man” called “Straight Talk, No Chaser.” Franklin also recently released a book called “The Blueprint.” The tour begins on March 19, 2011 and makes stops in Jacksonville, Charleston and Tampa. What do you think of Kirk Franklin and Steve Harvey going on tour together?