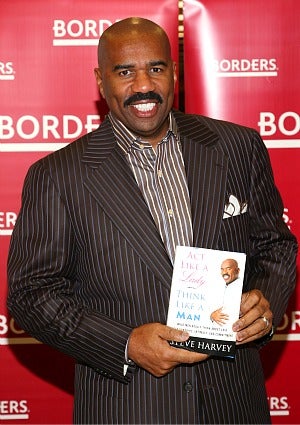 It’s been two years since Steve Harvey declared himself a relationships expert and released his book, “Act Like a Lady, Think Like a Man.” Since then the actor, comedian, radio host and philanthropist has amassed quite a following of women who swear by his “90 day rule” and other principles. As Harvey gears up to release his second book “Straight Talk, No Chaser,” we asked our Facebook friends what they learned from “Act Like a Lady, Think Like a Man.” Here’s what you said: Regina: “The 90-day-rule is my favorite and it’s true. More people should practice it. Most things in the book are old-school lessons that we seem to have forgotten about. Men need to go back to being gentlemen and women should not be so easy.” Terri: “The part when he wrote that a boy shacks up and a real man builds a home enlightened me. Kudos to him.” Trishanna: “It taught me a whole lot, especially about how men need to feel needed and appreciated.” Gewandra: “I learned about the 90 day rule, whether a man is fishing and the types that are throwbacks.” Tamara: “Since I read the book two years ago, I now understand men and I happened to snag the best man in the world. We got engaged on July 9, 2011!” Queenester: “I loved it! It enlightened me on how some men think. Steve Harvey may not be an expert but he is a man talking from a male perspective. After reading his book I could see where I went wrong in past relationships. What he wrote about was good old common sense that unfortunately all women don’t have or choose to ignore.” Coffee: “Steve Harvey was talking about real men and not boys. So don’t go looking in the book for how to deal with boys who won’t act right. It’s strictly about how real mature men operate.” Yvette: “I learned that although my kids can’t meet every one I may date, they have to be involved in the process before I can think about getting serious with anyone.”