We were finally introduced to the NBA MVP’s new Under Armour Curry 2 Low “Chef” sneakers and the Internet wasted no time roasting the underwhelming all-white kicks.

According to fans, the Curry 2 has about as much flavor as plain yogurt. They’re better fit for ER nurses, retirees, and dads walking around the neighborhood at a moderately fast speed — as seen in Jimmy Kimmel’s mock commercial — than the all-star currently leading the Golden State Warriors in the NBA finals.

The 2016 Tony Awards: All The Show-Stopping Looks

So they’ve been renamed with competitive titles like “The Bed Bath and Beyond 5s,” and “The Matinee 2:30s.”

Curry final addressed the criticism in a post-game interview on Friday.

“If I had them in the road bag I definitely would have worn them, shown how fire they are.” Also adding, “I love the nicknames, though, that they came up with, but I like them.”

And to further shake the hate “Straight fire,” using the flame emoji, was written across the front right kick. 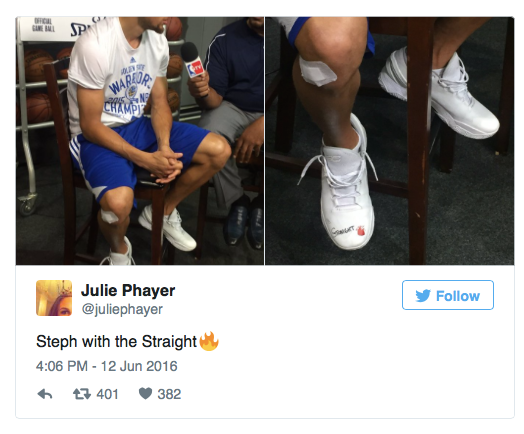 Unfortunately, it’s going to take more than that to convince everyone the orthopedic white-on-whites are actually cool. Maybe Curry should have applied more of that personal design touch before they went to production.