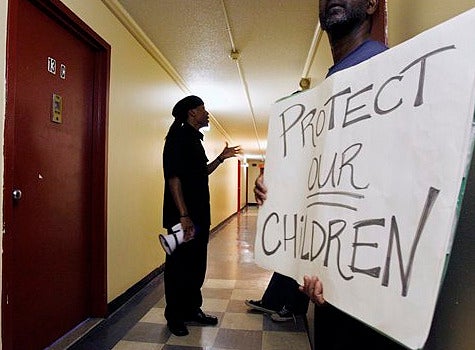 The case of a 7-year-old girl gang raped in a Trenton, New Jersey high-rise is turning more bizarre now that her stepfather has come out in defense of three of the accused. Speaking on behalf of the families of Gregory Leary, 20, Timear Lewis, 19, and a 17-year-old suspect whose name has not been released, the girl’s stepfather said, “These three had nothing to do with nothing; I don’t know why they locked them up.” He says the three men tried to help the little girl by getting her out of the apartment but were held at gunpoint. “If you had a gun pointed to your head, you wouldn’t be able to do nothing, either,” he added. Meanwhile, a lawyer for defendant Leary, who’s bail is set at $500,000 says the girl was not raped and “the allegations will not be substantiated by any forensic evidence.” But Trenton police say they do have evidence the girl was sexually assaulted. The girl’s stepfather maintains that he believe she was raped. If only he would be as passionate and vocal in her defense. Read More: