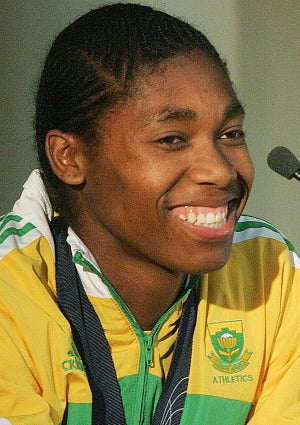 UPDATE 11/20/09:  According to the Associated Press, the South African sports ministry made the announcement that middle-distance runner Caster Semenya, who won gold in the 800 meters at the 2009 World Championships, will keep her medal.

They also said that the results of Semenya’s gender tests will be kept confidential and that the International Association of Athletics Federations (IAAF) has agreed to allow the 18-year-old runner to keep her prize money.

“Whatever scientific tests were conducted legally within the IAAF regulations will be treated as a confidential matter between patient and doctor,” the sports ministry said. “As such there will be no public announcement of what the panel of scientists has found. We urge all South Africans and other people to respect this professional ethical and moral way of doing things.”


11/16/09: South African middle-distance runner Caster Semenya, who won gold in the 800 meters at the 2009 World Championships, spoke exclusively to Britain’s ‘Guardian’ newspaper about fame, her future and questions about her gender.

“It’s not so easy. The university is OK but there is not many other places I can go,” Semenya told the newspaper. “People want to stare at me now. They want to touch me. I’m supposed to be famous but I don’t think I like it so much. I feel much better here–with Sponge [Coach Michael Seme] and the athletes.”

The day before the 800 meter finals, the International Association of Athletics Federations (IAAF) announced that Semenya had been the subject of “gender verification tests” in both South Africa and Germany. An endocrinologist, a gynecologist and a psychologist were all called in to verify whether Semenya, who had lived her whole life as a girl, was actually a man.

The 18-year-old starlet even has a positive outlook on those who question her gender. “I know who I am. I can’t change what they say.”

On Friday (Nov. 20), the IAAF is due to announce its ruling on all the medical tests. Based on those results, the IAAF will reveal whether it plans to ban her from competing again.