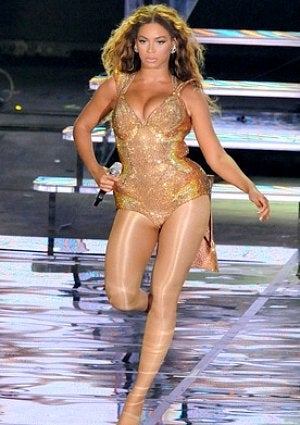 Her name is not only recognized worldwide, it turns celebrities into fans and the media into her best friend. Beyonce Giselle Knowles is a name that represents the cream of the crop, so why do so many sisters choose to hate on her? Wasn’t it Beyonce, a Black woman, who recently became the only pop artist to break the top 10 of Forbes list of Hollywood’s 20 Highest Earning of 2010? You can’t forget that last month her “I Am…World Tour” DVD went double-platinum in a year when even the most popular artists’ albums weren’t going gold… the same woman who made 2011’s Guinness Book of World Records, along with her husband, for “Highest-Earning Couple.” In February she set another record when she swept the Grammys with a total of six awards, and in the same month entered the luxury goods industry selling $3 million dollars worth of her fragrance “Heat.” Without sounding like a stan (stalker+fan), I could go on. For the past 15 years, Beyonce has perfected and mastered her craft. This is why I’m baffled that so many women, Black women included, (judging by comments on Twitter, Facebook and even on Essence.com) find joy firing off the most snide remarks at anything even remotely related to the singer. Since her debut solo album, some of us “sisters” have made hating on Beyonce a favorite cultural pastime. Everything from “she’s overrated,” to “if she gets any lighter she’s gonna fade away,” to “a day doesn’t go by without Essence talking about Beyonce.” So, here I am, reporting about Beyonce again, because not acknowledging Beyonce as an undeniable cultural force is absurd. At this point there aren’t any valid arguments to support the belief that she isn’t. How long will people hold a grudge against this woman because she left Destiny’s Child… five years ago? Before complaining about Beyonce “disowning” her group, ask yourself when was the last time you (legally) downloaded a Kelly Rowland song, or bought a Michelle Williams album? Some say she’s overrated and everywhere, but that’s what happens when you work your ambitious ass off and are always striving for more. If it were left up to some Black female commentators, Beyonce — or as she’s not-so-affectionately referred to, “Stankyonce” — would be considered talentless. Some complaints include the usual, “she can’t act or sing, she’s phony and way too sexy, she’s not classy enough.” Hate, hate, and more hate. Stop it. The commentary has become so passionately angry, you’d think Beyonce did something personal to some of these women. You can call her every name in the book when she’s shaking it and showing it all over the stage, but Beyonce is paid to entertain, and that she does, very well. My theory is that confident women love and support other confident women, and those who lack confidence — hate. Beyonce represents Black women working hard to achieve success and reach their goals. She’s a bad mama jama who has conquered the music business with an untainted image. Making her own ends meet without opening her legs for anyone besides her very accomplished husband. She floats through both White and Black media oozing sexy, juxtaposed by her own grace and humility. Some women just don’t know what to do with Bey but envy, because looking at her reminds us of our own insecurities. Beyonce has torn down stereotypes, set new standards, and through it all, redefined what a Black woman can be. Before your comments get misconstrued as hate or negativity, remember what we’ve all been taught – if you don’t have anything good to say….. What do you think?

‘I’m Terrified I Might Be Here Forever’: Brittney Grin...

Amazon Prime Day Is Almost Here — What You Need To Know Ab...