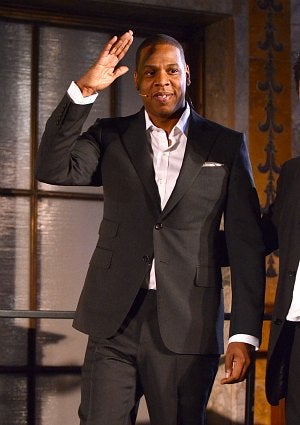 For the first time ever, fans can grab Jay-Z’s latest work at the book store instead of on iTunes. Part memoir, part ‘oh, is that what Jay meant?,’ “Decoded,” which hits stores today is about “music and the power of words — rap as poetry,” said Jay last night during a conversation with Cornel West at the New York Public Library. Jay also added that Oprah had inspired him to write the book. “Oprah was a big reason I wrote this book,” he said. “We had conversations about language and the ‘N’ word, and while we didn’t agree, we left that conversation with a better understanding.” This is actually Jay’s second time penning his story. A few years ago, Shawn “Jay-Z” Carter, signed a deal with MTV Books to release an autobiography, “The Black Book,” but ultimately decided against it because he thought it revealed too much about his personal life. Jay has grown a lot since then. Revealing intimate thoughts and stories that are forced to stand alone is a sign that the multi-platinum artist is likely more comfortable today with himself and his personal journey. Being honest is a true sign of maturity. And so is admitting mistakes. In a recent Wall Street Journal interview, Jay expressed regret for the lyrics in his hit single, “Big Pimpin.” While it’s noble to admit a faux paux, to correct one is a nobler act. And that is what Jay has largely done. His progression, a gradual one, was to be expected. A young boy’s view from a rusted Brooklyn window is a lot different than a married man’s view from a yacht in St. Tropez. His style, demeanor and lyrics, though different from 1988 when he first started rapping, are still revered because they’re authentic. Forty birthdays, a heap of successes, a few losses, a rap feud or two, and a superstar wife all likely contributed to the mogul’s personal and professional growth. Oh, and don’t forget the money. Jay is reported to be worth an estimated $450 million and that type of dough changes more than just “the number after the dot on the range,” it exposes you to the world and its endless opportunities, changes your scope of influence and lands you on the cover of Forbes with Warren Buffett, one of the richest men in the world. Jay-Z’s growth has been documented throughout his musical catalogue. Even songs riddled with self-hate, self-doubt, arrogance, regret, or disdain for women represent a place or a thought that Jay-Z identified with on some level at some time. I love that Jay-Z (and many other Black men) have found freedom to express their thoughts in a sound proof booth. I love it even more when their tune changes. Lakeia Brown is a freelance writer living in New York City.