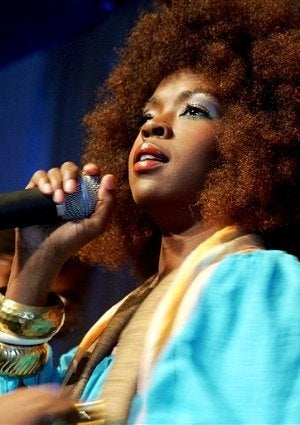 Back in college, my friend showed up at a ticket window hours before it opened and stood in line for Lauryn Hill’s “The Miseducation” tour. She was at that time a student with no job, but plunked down the plastic for her seat and without asking, seats for three of her friends. She didn’t have to question if we wanted to go or if we’d be able to pay her back. She already knew we’d find a way…

Weeks later, we sat in the balcony of Constitution Hall in D.C. watching Lauryn master the stage, bare her soul and kill us softly by singing and spitting our lives with her words. Even then, babies, really, we’d been educated enough to know her depths, had lived through enough hurt to share her pains, endured enough struggles to recognize her strength, and searched for meaning not yet found long enough to cry along to “deep in my heart/ the answer, it was in me…”

In December, I saw the alert that Lauryn Hill was playing a series of intimate shows in New York and other cities across the country. I searched for tickets too late, but wasn’t bummed that I’d missed out. Not because it’s been over a decade since her last studio album (which has consistently remained in heavy rotation on my iPod) but because really…. God, I can’t believe about to say it publicly: Lauryn isn’t Lauryn anymore. And yes, after years of denial, I’ve finally accepted that. Her heart is no longer in the music and I’m over any hope of her musical resurrection.

Over the last years since L-Boogie chucked deuces to The Industry and her fans, she hasn’t been the same. Reviews of her shows complain of her extraordinary lateness and her voice being shot (the cracking notes on Unplugged were the first sign). The show I missed in December? Lauryn, or Ms. Hill as she prefers to be called, arrived three hours after the start time. Veteran music critic Jon Caramanica’s review of the performance in the New York Times bordered on scathing:

Though Ms. Hill was once known for rapping and singing with equal authority, both skills were a little worse for wear here. There’s a persistent rasp in her singing voice that slashes even her most beautiful passages, like the lithe one at the end of “Zealots,” and her cadences were cluttered and a bit lumpy.


And she wasn’t just having an off night. Hill hit up the Rock the Bells tour in D.C. last August and The Baltimore Sun’s review called her 20-minute set, “a lesson in dysfunction” and “a huge letdown for her fans.”

Between the lack of new music, the half-cocked shows, the eternal lateness, and the haughty attitude (in Caramanica’s review, he reports Hill told angry and tired fans, “I spent my entire 20s sacrificing my life to give you love. So when I hear people complain, I don’t know what to tell you,” she said. “I personally know I’m worth the wait.”) I’ve concluded that Lauryn’s heart just isn’t in the game anymore. Maybe it’s in Zion (and her other children). Wherever it is, I’d rather have nothing at all from her than to have… this.

Frankly, Lauryn’s lack of presence in the present is ruining my fond memories. So I’m taking my falling back on her to keep my nostalgia intact and stacking my hard-earned money for a new Marc Jacobs bag. No more overlooking the talents of other artists because they aren’t the voice that blared from my 50-disc CD system that played just one disc — Hill’s — on repeat for an entire year.

No more wishing for the return on artist who frankly, shows up (late) but isn’t all there. The next time I’m confused, vulnerable, and in hope of fresh art that reflects the 360 of my woman-ness, I’ll stop looking for Ms. Hill’s return and pound out my thoughts on my laptop. Lauryn told me in ’98 that the answers were all within. I should have listened.

Demetria L. Lucas is ESSENCE’s Relationships Editor and the author of A Belle in Brooklyn: Advice for Living Your Single Life & Enjoying Mr. Right Now (Atria), which will be released in June. Pre-order her book now on Amazon.com.