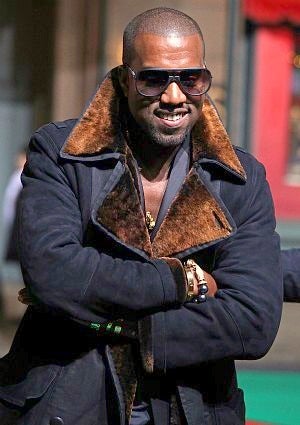 Years ago I had a New Year’s Eve conversation with a man who, after asking me my marital status, advised that men only come in two distinct types: “A’s” who are dependable, sensitive, humble and self-aware (like Aidan from “SATC”) or “B’s” — the arrogant, blow your back out, workaholic, leader option (like Mr. Big.) “Women want both in the same man, an A-B hybrid,” he said. “That’s a ball on confusion and contradictions. If you want to be happy, you’re going to have to choose which one you want.” I thought back to this conversation as I was listening to Kanye West’s latest album, “My Beautiful, Dark Twisted Fantasy.” Let’s just get this out of the way: I am a die-hard Mr. West fan and think he is a musical genius. I make no pretense of my bias and think everyone, no matter how you feel about West the man, should BUY (not illegally download) “Fantasy” to reward your ears with the aural pleasures created and produced by West’s imagination. That said, I don’t imagine most people will read my glowing take on “Fantasy” and flock to iTunes. While nearly everyone except legendary producer Quincy Jones acknowledges West’s musical genius — this morning Jones called West “just a rapper” — many people have trouble separating the man, West, from his music, wonderful. Because of his public image post The VMA Incident (and really, every interview or unscripted speech he’s ever done before or since), West will likely miss sales from those who don’t wish to consequently inflate his ego further by filling his pockets deeper. And that’s unfortunate. On “Fantasy,” West, as usual, is an A-B hybrid. On “Blame Game” he’s an emotional wreck unable to reconcile the thin line separating the love and hate he feels for an ex who cheated. Over the haunting plucked piano on “Runaway,” he toasts to the “douchebags” (himself?) and laments his personal demons and the conflict they cause: “Never was much of a romantic / I could never take the intimacy… the look in your eyes is killing me.” But just as quickly, West jumps from the man some suspect he may be in his quiet hours to the man who we, the public, are more accustomed to seeing. On “Power,” the album’s first single, West is in full genital-grabbing bravado: “I know damn well y’all feelin’ this [expletive] / I don’t need yo’ [expletive], [expletive], I’m on my own [expletive].” On “Devil in A Blue Dress,” West offers a playful swagger-filled boast about his very own greatness: “Hood phenomenon / the Lebron of rhyme / Hard to be humble when you stuntin’ on a Jumbotron.” Then he turns over the mic to Rick Ross to drop an equally classic rhyme over a laconic soul sample similar to the type that provided the undercurrent of West’s first album, “The College Dropout.” In theory, West’s vast dichotomies sound like the sonic cracks in a schizophrenic surface that many think lurk inside him. But in application? “Fantasy” blends effortlessly, painting a portrait of a conflicted man with emotions within us all, just in deeper extremes. Undoubtedly, West would make a horrible boyfriend, just as my New Year’s Eve friend suggested. West admits as much on “Runway” (and again on another track “Blame Game,” which features John Legend.) But as a musician? He’s a perfect hybrid. Demetria L. Lucas is ESSENCE’s Relationships Editor and the author of the upcoming dating advice guide, A Belle in Brooklyn: Advice for Living Your Single Life & Enjoying Mr. Right Now (Atria, June 2011). Follow her on Twitter at @ABelleinBK. “My Beautiful Dark Twisted Fantasy” is available on iTunes and Amazon.com