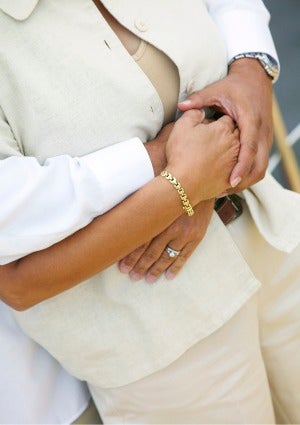 Remember that piece of paper called the Constitution with that little section called the Bill of Rights that’s supposed to ensure that all Americans are treated equally under the law? Well, the Obama administration signaled this week that same-sex married couples are entitled to the same protections guaranteed in the Constitution such as social security benefits, joint taxes, and health insurance coverage as their heterosexual counterparts.

In an extraordinary shift in policy and a potential change of heart this week, the president announced that the Department of Justice will no longer defend the Defense of Marriage Act, or DOMA. Under DOMA, which was passed in 1996, the federal government has the right not to recognize the marriages of same-sex couples.

Now this is change we can believe in!

Marriage goes beyond registries at Crate and Barrel and little blue boxes. For gay and lesbian couples it’s about the ability to protect their families and safeguard their homes. Currently there are only 5 states and the District of Columbia that recognize same-sex marriage, and if you happen to live in those states, you’re lucky. But what about the gays and lesbians who live in the other 45 states? Should taxpaying and law abiding citizens of this country be relegated to just a piece of the American dream?
Contrary to popular images and slogans used by antigay organizations—marriage equality is not a self-interested scheme put together by an “over privileged and wealthy” group of gay white men. In fact, marriage equality, and other pro-equality policies, would most benefit gay people of color.

According to the New York Times’ recent article we now know that Black and Latino gay couples are twice as likely to be raising children than whites and that these families are among the most economically disadvantaged in America.Federally recognized marriage would provide gay families of color with the financial, health care, and other protections necessary for them to thrive.

With President Obama’s announcement this week these couples are a step closer to being able to care for their families the same way their neighbors do. Our laws shouldn’t change from household to household they should be the same for everyone and the Administration now agrees with that.

“Much of the legal landscape has changed in the 15 years since Congress passed” the Defense of Marriage Act, Attorney General Eric Holder said in a statement. Holder went on to explain that since DOMA’s enactment, laws criminalizing homosexual conduct have been overturned and “Don’t Ask, Don’t Tell” has been repealed.

Conservatives are already lined up to condemn the president’s actions. You would think that a party so steeped in “family values” would support the stability that marriage provides given the fact that they spend millions on campaigns to slander the gay and lesbian community calling them “promiscuous” and “unsavory.”

We live in a society that is constantly evolving and growing faster than you can tweet it. This week signals that our laws are slowly beginning to the same.

Danielle and Aisha Moodie-Mills are Living, Loving and Laboring OUT Loud! They serve as Advisors for LGBT Policy and Racial Justice at the Center for American Progress where their work looks at the impact of public policy on gay and transgender African Americans.
Follow them on Twitter @FIREFund and @threeLOL.