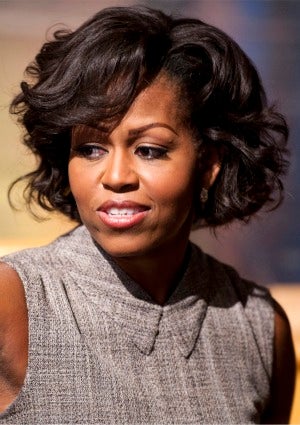 Last week, Joan Rivers sat down for an interview with Howard Stern, in which she revealed she scrapped a potentially offensive quip about the First Lady from her routine last year. The aging comedienne stated that her “We used to have Jackie O, now we have Blackie O!” line may have offended folks, though she thought it was “an adorable joke”.

Now, as far as racially insensitive jokes go, ‘Blackie O’ is far more innocuous than, say ‘nappy headed hoes’. In fact, there is a blogger who calls herself ‘Blackie Collins’, a play off of the name of romance novelist Jackie Collins. Rivers’ remark is more so lame than it is virulent (Really? She’s Black and classy and she’s a stylish First Lady…call her ‘Blackie O’! Boom-boop-ting! Not even giggle worthy, ma’am). However, it’s yet another reminder that Black folks- specifically, our First Lady and her husband, our POTUS — just don’t get the sort of respect typically afforded to the crowns they wear.

Why is it so easy to toss out a racially charged term and then tell Black folks ‘Hey, it’s no big deal’? Even if it isn’t a big deal, it isn’t for White people to tell us when and when not to be offended when it comes to race. Furthermore, given that Rivers had been warned against using the joke and pulled it for fear that folks would find fault with it, it’s unfortunate that she decided to mention it on Stern’s show anyway.

Mrs. Obama isn’t the first First Lady to be disrespected by comedians, and reporters. Former First Lady Hilary Clinton was mocked for her clothes and her political interests, amongst other things. And we know that all Presidents are susceptible to both criticism and out-and-out roasting. However, the racial element does make things different when it comes to this couple.

Calling a Black POTUS a ‘monkey’ or his wife ‘Blackie’ isn’t the same as mocking George W. Bush for looking like an animal or berating Mrs. Clinton out for refusing to stay home and bake cookies. Race is still a painful and complicated matter in this country. The events of the past two years have shown us that the election of a Black leader has done very little to change that reality. And yet, don’t hold your breath waiting for White Americans to abdicate their ‘right’ to make uncomfortable jokes about race. It won’t happen any time soon.

Why? Because when it comes to offending Black folks, it’s never a big deal.

Jamilah Lemieux writes about race and culture on her blog, The Beautiful Struggler.