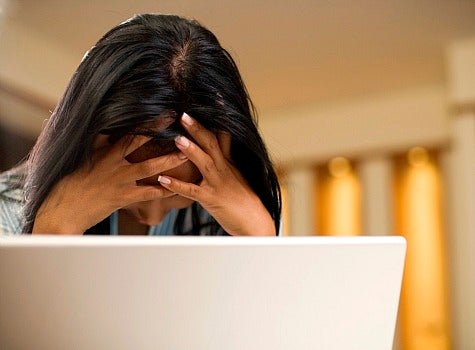 Trust is a biggie. It’s hard to have a good relationship without trust. Once those first seeds of doubt are planted in a relationship, it’s hard to get that doubt out of your head. Naturally, some folks move from getting it out of their head to cracking into their spouse’s online accounts.

That was the case of one 33-year-old Michigan man and his wife. And now Clara Walker’s ex-husband, Leon Walker, is facing the possibility of five years in prison because he read his wife’s email…

According to ABC News, Leon Walker said he checked Clara Walker’s Gmail account last year because he was concerned about how his wife having affair with another man — her second husband — was affecting their daughter.

Clara Walker also has a son with her first husband. “I knew she was involving her son in her relationship with (her second husband). And I was very concerned that she was also doing the same thing with our daughter,” Leon Walker told “Nightline.”

The prosecution is charging the ex-husband with illegal “hacking,” arguing that the law provides for Internet privacy, even between spouses. Even on email. Even if, as the ex-hubby claims, Clara Walker kept the password to her Google “Gmail” account next to the computer they mutually owned. But the prosecution is viewing email the same as snail mail and arguing that, in either case, if someone other than the intended recipient opens it without permission, that’s illegal snooping.

While no one wants their privacy violated, this application of the law is a serious over-reach and could have untold consequences for many people. After all, I’m a father. What would happen to me and other parents if we logged into our kids’ Facebook or Twitter to see what they’re up to? Can my kid turn around and call the cops on me for violating his privacy?

Plus, if “snooping” through a significant other’s email is a crime, then it’s one a lot of people have committed. More than 24 percent of men have claimed to “snoop” on their girlfriend. Some people even go as far as to hire private investigators to spy on spouses. Will private eyes go to jail?

But often times, if you think something is going on, chances are, there is something going on. And in the case of the Walkers’ broken marriage, finding evidence of an affair may have confirmed a husband’s fears, but is that worth going to prison over?

We’ll be discussing this and more tonight at 7 p.m. in our live chat about “Love in the Digital Age.” See you there.

Paul Carrick Brunson is a Matchmaker and Lifestyle Coach. He can be reached at www.onedegreefrom.me / fb.com/OneDegreeFromMe / Twitter @OneDegreeFromMe