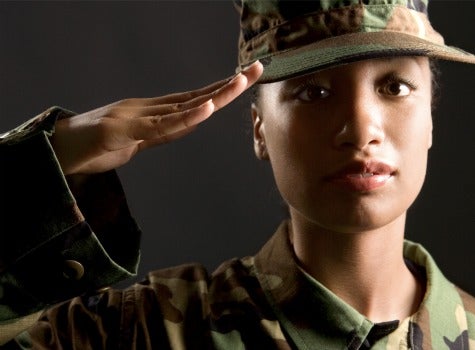 “Don’t Ask, Don’t Tell” poses an imminent threat to gay and straight black women. So, where is the outrage? Black women have taken up arms alongside their male counterparts for decades, dedicating their lives to defending our freedoms even at the expense of their own. Today, however, our sisters in the military are under attack, not just from ominous enemies abroad but by discriminatory practices at home that put them in harm’s way and lead to career-ending discharges. The military’s “Don’t Ask, Don’t Tell” (DADT) policy, which bans gays and lesbians from serving openly, threatens all servicewomen regardless of their sexual orientation. But Black women are bearing the brunt. Pentagon data shows that DADT has been used to kick Black women out of the military at a much higher rate than any other group.  The military has served as a pathway to economic empowerment for minorities and women for generations. It offers health care and housing benefits that support their children, helps them to afford college, and secures stable civilian careers. So imagine the hardship faced by Black servicewomen who are unduly targeted for dishonorable discharge from the military because they are gay or simply accused of being gay. Many of them are also mothers and heads of households. Their careers are shattered, and their children and families suffer. Even when Black servicewomen play by the rules they fall prey to the perils of the DADT policy regardless of their real or perceived sexual orientation. Fellow servicemen, male and female, have exploited this policy to discredit superior officers, and they’ve used it as a gag order to retaliate against women who have rebuffed their sexual advances. Throughout history Black women have been degraded and forced to exchange their bodies to safeguard their families. Under the guise of DADT, our sisters in the military today continue to be subjected to sexual blackmail and harassment, and forced to trade their personal freedoms to protect their honor, livelihood and jobs. A telling case in point is the tragic story of African-American Army Sgt. Tracey L. Cooper-Harris, who wrote to President Barack Obama earlier this year appealing for an end to DADT. In her letter, Sgt. Cooper-Harris relayed the horrendous ordeal she experienced as a teenage guard. “The signal from command was clear: being gay was a far more serious offense in the military than sexually harassing a fellow service member,” she wrote. “I ultimately chose what I believed was the best decision for me at the time. I let these men have their way with me in exchange for their silence.” The facts are clear, and the statistics are undeniable. Black servicewomen are losing their dignity, their jobs, and their opportunity to pursue the American dream because of the legalized discrimination that is DADT. Where is the outrage? Time and time again, when members of the Black community have been disproportionately harmed by public policy or faced with institutionalized discrimination, we have rallied around the victims. Yet with DADT, the Black community’s silence has been deafening. Sgt. Cooper-Harris’ silence did not protect her from the harassment she endured, and our silence does not protect the hundreds of Black women who are victimized each year under DADT. We can no longer sit idly by while our military sisters are singled out for discrimination. It is time for us to stand up and defend our sisters who defend us on the front lines each day. Aisha & Danielle Moodie-Mills are Fellows at the Center for American Progress. Their work explores the intersection of race, economics, sexual orientation, and public policy.