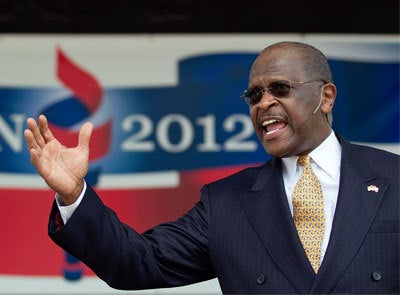 During a recent interview about his lofty (and, if you ask me, completely unrealistic) presidential aspirations, the writer opposite the admittedly accomplished former CEO called Cain an African-American — and was verbally mollywhopped for the mistake. Normally, I would paraphrase, but Cain’s quote is so classic, this masterful piece of tommyrot must speak for itself.

“I don’t use African-American because I’m American. I’m Black and I’m conservative. Most of the ancestors that I can trace were born here in the United States of America. And then it goes back to slavery. And I’m sure my ancestors go all the way back to Africa, but I feel more of an affinity for America…”

And, scene. Just like that, the Republican party showpiece leaves no question that he is, in fact, penny wise and people foolish. He’s already been steady scratchin’ and shuckin’, riding that lame birtherism bandwagon and basically billing himself as the other Black guy, the Obama alternative if you still want a little chocolate with your presidential candidate. He’s been coming sideways at Barack with no agenda except that he, the poster child for the GOP in affirmative action, can do it better.   But alas, I’m not convinced that someone can lead an entire nation when he can’t even get the facts of his own family line straight. Baby steps, Mr. Herman, baby steps.

Cain says he’s sure his ancestors go all the way back to Africa. Well, I’m positive they do. I don’t need to swab his cheek for a DNA sample to know that man is Af-ro-kin. That blood line has not been cut but so much. The offensive part of his statement is not that he identifies more with America than Africa — that’s understandable. But you can be proud to be an American without showing disdain for Africa. He’s purposefully distancing himself from the continent and worse, he’s been mocking President Obama for his Kenyan roots.   In the process, Cain has outed himself as one of these folks who thinks that slavery was the origin of Black America, as if we sprouted from some master’s plantation like big ol’ crops.

Our story didn’t start in 1619 when the first documented band of enslaved men and women were herded into Jamestown. That’s a chapter in the tale, but the beginning for every Black family — heck, for all of humanity in general — stretches across an ocean right back to Africa, uncomfortable as that might be for him to acknowledge.

As disheartening as it is to see young people disengaged from their history, it’s downright pathetic when older folks are lost in the sauce. Cain was born in 1945, which means he’s lived through Jim Crow, the Black Power era and (Lord help us) both Bush administrations. He’s been formally educated and gained life experience. But it seems he still doesn’t suspect that he’s being used as a lawn jockey on the Tea Party home front.   I wouldn’t even be as disgusted if he were more contemplative in his reasoning for not wanting to be called an African-American. I don’t either. I always refer to myself as Black, not because I don’t want to embrace the birthplace of my ancestors, but because I want to include myself in the Diaspora. I am an American, true. But I’m first and foremost a member of a greater, global community of Black people who live everywhere (except maybe Iceland and Antarctica for obvious reasons). Limiting myself to being an African-American is too divisive. Plus, it takes too long to say.

That’s not Herman Cain’s twist. He just doesn’t want to be African. But I don’t want him to be Black. So I guess we’re both just going to have to sulk over the cold, hard facts of reality.