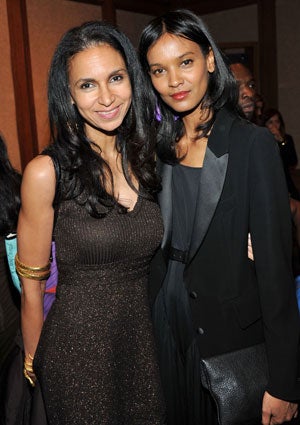 Anyone seeking the courage to survive just about any challenge or calamity should run, not walk to see “Desert Flower,” a film chronicling the epic life of supermodel turned human rights activist Waris Dirie.

Dirie made her way across the Somali desert alone at age 13 to escape an arranged marriage, and later became one of the first to speak out against female genital mutilation, a barbaric ritual she endured as a very young child and which is still practiced worldwide on an estimated 8,000 girls a day.

Based on the bestselling autobiographical novel Dirie co-wrote with Cathleen Miller, and told in flashbacks, this film, by German director Sherry Hormann begins where Waris did: in the deserts of Somalia where her family were nomadic shepherds. The opening shot of a bright yellow Hibiscus with a hot pink corolla, an incongruous burst of color and life in an otherwise craggy, inhospitable landscape, becomes an enduring symbol of Waris, and of the human spirit’s ability to survive and thrive against overwhelming odds.

At the deliberate pace of a slow but determined walker, the film leads us through the Job like series of trials Waris endured as she made her way from Mogadishu, to London and international fame. After being dismissed from the London home of a wealthy relative (where she worked as a uniformed maid) in the wake of a political coup, Dirie was discovered by British photographer, Terence Donovan (affectingly portrayed as a rumpled humanist by Timothy Spall) while scrubbing floors in a fast food burger joint.

Refreshingly, though, this is not the Cinderella story of an African woman rescued by fame and fortune in the West. Instead, it painstakingly captures the torment and isolation of an immigrant torn between two cultures and struggling to find her place in the world without betraying her heritage. In one of the most affecting scenes, Waris flees a hospital emergency room in tears when a Somali male nurse castigates her for allowing a white male doctor to examine the painful infection that has developed as a result of her genital mutilation. Her ultimate victory is bittersweet, both public and deeply personal, when she finds the courage to address the U.N. assembly about the blight of female circumcision. In that scene, played without the usual Hollywood klieg-lit fanfare, Waris’s speech is a bone cuttingly spare expression of womanhood thwarted and innocence forever lost.

As portrayed by Ethiopian model and Estee Lauder spokesperson Liya Kebede, Waris’ emotional evolution is wrenchingly clear. The film suffers at times from abrupt shifts of tone, between the David Lean-esque sequences depicting life in Africa and the slapstick comedy of Waris’s interactions with a Dickensian cast of characters in London: the bumbling handyman who has a crush on her (Craig Parkinson), her best friend, a shop girl with two left feet who dreams of making it as a ballerina (an ultimately endearing Sally Hawkins). The casting of the young Waris seemed slightly sloppy as the child bears no physical resemblance to the adult. These are small flaws on a broad, beautiful canvas.

The cast is solid as desert rock and Kebede’s performance is award worthy. At the opening at New York’s Paley Center the other night, the sylph like Kebede told guests that at a screening in East Africa attended by three thousand locals, several men stood up to say that until seeing this film, they had not understood the emotional effects of female genital mutilation, and they would never again subject their daughters to the brutal process. That alone makes this film a gift to mankind.