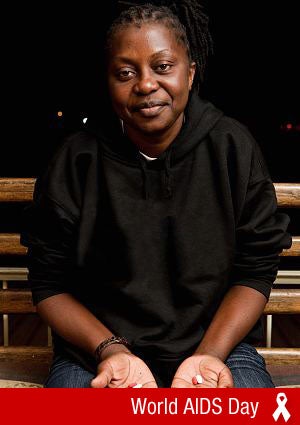 On October 13th, I celebrated by 40th birthday. For many people that’s a major milestone. It was for me as well, but not for the reason you might suspect. That day marked six years since I chose life over death. Six years ago I chose to start antiretroviral medication to fight my HIV. Since that day, I’ve dedicated my life to fighting this disease — by adhering to my medication and treatment and by committing myself to educating and counseling others living with this disease. My journey as a person with HIV started long before I was tested. Before I had access to medication, I lost all three of my children to HIV. These were, of course, the most painful moments in my life. I wish that I had access to treatment to prevent them from getting sick or that they would have been able to hold on long enough to get ARV treatment when it became available in Zambia. I have worked hard to turn that pain into positive progress for myself, and my country. I was one of the first people to enroll in a free antiretroviral medicine program and have since dedicated myself to educating my countrymen about prevention, getting tested, access to treatment and adherence to treatment. I began working as a Peer Educator supervisor, supervising 3 clinics where all the Peer Educators are HIV positive. I have recently moved to the voluntary counseling and testing (VCT) department, where I go out in the community, offering door to door VCT in seven communities in Lusaka and 17 rural sites in the Western Province of Zambia. It was because of my journey with this disease that I was asked by (RED) to be involved The Lazarus Effect film. In this film, I tell my personal story while helping to illustrate the incredible life-saving transformations that take place when people who are dying from AIDS gain access to ARVs and showcase how this treatment can help prevent mother-to-child transmission of HIV. This World AIDS Day, I want to join (RED) in helping to raise awareness of the fact that we are very close to reaching one of the most important milestones in the fight against AIDS — creating the first HIV-free generation of babies in nearly 30 years. Last year, nearly 400,000 babies were born with HIV, but the treatment exists to bring that number to zero within five years. The key is maintaining the resources and focus we need to ensure that treatment reaches the remaining 55% of women who need it. HIV is not an issue just for Africa. It’s an issue for every individual who lives on this planet. Some people pretend that it’s “not our problem” or “it’s hopeless.” Creating the first generation in nearly three decades born without the burden of this disease is a mission for all of us. I’m proud to be an African that is doing something about it. Connie Mudenda is an Implementation officer — Community Mobilization in the Voluntary Counseling and Testing program at the Centre for Infectious Disease Research in Zambia. She is featured in “The Lazarus Effect” which airs on HBO on December 1, World AIDS Day.