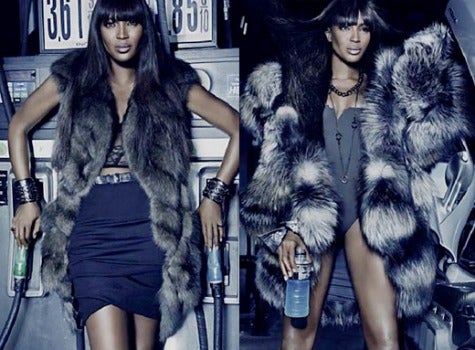 Here’s what’s haute on today’s Blay Report: Remember those photos of Naomi Campbell pumping gas at a station? Well, it was for Dennis Basso fall campaign — and the images are finally out. In it, Campbell is rocking furs worth thousands of dollars and a body that’s priceless! [Nymag.com] Now Armani has 3-D glasses too? Twenty four hours after Gucci announced their launch of 3D glasses, Armani has done the same. Their version retails for only $85, while Gucci’s is $225. Are you buying it? [Coco Perez] Talbots got a big boost of publicity when Michelle Obama wore the retailer’s pink sweater set with matching ribbon necklace on the Ellen show yesterday. [Nymag.com] She’s finally announced her pregnancy — and now she’s announcing a pregnancy line with an earlier due date. On November 29th, Mariah Carey will go live on HSN to sell her first lifestyle collection offering everything from necklaces to baby clothes! [WWD] Oprah is committing to fashion on her new OWN network! She’s added former “Queer Eye for the Straight Guy” Carson Kressley to her line up. Kresley will host a show called “Carson-Nation” where he travels the country to give people make overs. [PerezHilton]