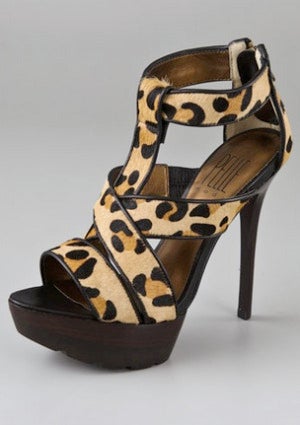 I have a confession to make. My name is Keli and I’m a heel-a-holic. I didn’t come to terms with my high heel addiction easily. In fact, as someone who’s been nearly 6 feet tall since junior high, I had never considered high heels a necessity. Looking back, I actually spent much of my adolescence trying to call less attention to my height, not more. But at some point — and I’m not exactly sure when it happened — I became just as obsessed with sky-high stilettos as some of my vertically challenged sisters. How obsessed? Let’s put it this way… I’m currently in rehab and therapy and struggling to let go of my addiction. And no, I’m not joking… After being hit by a car and injuring my leg, I was forced into physical therapy and early on had an exchange with my therapist that revealed the depths of my high heel addiction. It went something like this: “So when will I finally be back to normal?” “Well, Keli, you can probably start easing back into exercising in a couple of months.” “Who said anything about exercising? Boot season is right around the corner and I have some fabulous suede ones with a 3-inch-heel that I have to wear.” As my therapy wore on, I finally confessed that I was actually less mad at the guy who hit me for making me miss a couple of TV appearances to recuperate, than I was for him preventing me from wearing heels to New York Fashion Week. By the look on my physical therapist’s face, you would have thought I was speaking a foreign language. Then I realized. He’s a man, so to him I was speaking a foreign language. For the record, I am so glad my accident wasn’t worse. I am thankful to be alive, and to be walking — very thankful. But while I never thought I’d say this in a million years, I’m saying it now: Damn I miss wearing high heels. I miss that feeling you get when you’re finished dressing and you slip on the perfect pair of pumps and voila, you’re transformed. The right pair of heels can work the same magic as a Halloween mask; instantly transforming you from the fashion equivalent of Jackie O the rapper, into Jackie O the First Lady. But my physical therapist’s reaction was yet another reminder that even good men just don’t get our obsession with great shoes. They joke about it the same way we joke about their obsession with cars or sports teams (you know, the ones they don’t even play for). Yet we all know that one of the easiest ways to distract a guy from a game is for a woman to walk by in a hot pair of heels, the higher the better. At least that’s what we’ve always believed. But according to a new study published in TIME Magazine, men do not notice women in high heels any more than they notice women in flats. The study, along with my accident, and a newly found life of wearing flats and sneakers full-time has led me to ponder a central question: Why do we wear high heels in the first place? They’re not comfortable. They’re not practical. And it’s not like we can see ourselves walking in them, so if men don’t even notice them… then what’s the point? Based on the reactions in cyberspace after the study was published, I guess that depends on which men you ask. The study findings were produced by a university in the United Kingdom, so perhaps those of us hoping to avoid any more torture of our feet should move there, because American men — at least the ones I asked — don’t seem ready to give up on the joys of watching women in stilettos. Within minutes of posting news of the study on Twitter, I heard from some of my male followers who challenged its accuracy. “That’s a lie. Ain’t nuthin’ like a hot girl in high heels,” one wrote, and “That study is NOT true,” said another while one declared, “Guess I’m the odd man out.” Basically, the fellas confirmed what many of us ladies already know: They may not be comfortable, and they may not be practical, but there’s nothing like a great pair of heels. Whether they’re Payless or Prada, nothing compares to the feeling of finishing off the perfect dress or power suit with a couple of extra inches of confidence. And there’s nothing like seeing the extra twinkle in the right guy’s eye when he does notice — not the heels, but the woman wearing them. Because as Coco Chanel once said, “Dress shabbily and they remember the dress. Dress impeccably and they remember the woman.” That’s not to say a woman can’t dress impeccably in flats. The most stylish among us can look impeccable wearing a Hefty bag and flip-flops. But the rest of us need a little something extra. Which means my physical therapist better pick up the pace, because I just spotted a lovely pair of Prada pumps in my hard-to-find size, on sale, and they have my name on them. Keli Goff is a contributor to theloop21.com and The Huffington Post.