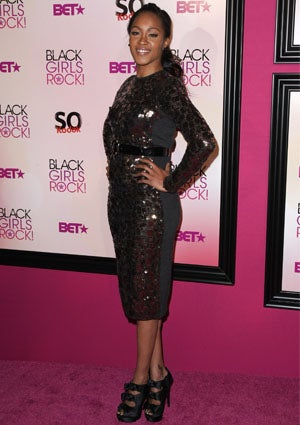 With two albums, a platinum single and a Beyonce tour under her belt, R&B recording artist Shontelle has the makings of a superstar. Her latest LP, “No Gravity” was recently released and received positive reviews everywhere, from bloggers to industry elites. In the middle of a recording session, Shontelle chit-chatted with ESSENCE.com about her uber popular single “Impossible,” her experience touring with Beyonce, and the Rihanna comparisons… ESSENCE.com: “No Gravity” is your second album, how does it feel to have this kind of success this time around? SHONTELLE: I don’t know if I could be any more greatful or appreciative. This is a very difficult climate for an artist to break in. There’s a lot of hard work that goes into it, but also a lot of luck. That plays a big role. ESSENCE.com: “Impossible,” your first single, just went platinum. What is it about? SHONTELLE: “Impossible” is a song about being in a relationship, when you think you’ve found the one or you’re looking at this person and say “wow, I can really see a future.” Then it doesn’t work out, unfortunately what you hoped is the impossible has now happened. Now you’re faced with accepting it and having to move on. It’s a real heartbreak song. ESSENCE.com: What inspired your second single, “Perfect Nightmare?” SHONTELLE: I’ve built a reputation of being that artist that sings from the soul, from the heart. Once I did “Impossible” I thought I needed a song that can show that other side of me. I went to Rodney Jerkins and said, ‘How can we establish me or show that other side of me without being too shocking.’ So we decided to come up with that kind of a record. But at the same time, the content still relates to situations that people go through in real life. I call it the opposite of “Impossible.” “Impossible” is about a relationship you didn’t want to end. Whereas “Perfect Nightmare,” you’re stuck in a relationship that you know is not good for you, for some reason, you can’t pull yourself away. It’s about the struggle of having to end a relationship that isn’t good for you. You may be in love with the person, but the circumstances aren’t good. So it’s like a perfect nightmare. ESSENCE.com: You and Rihanna have similar backgrounds, how are you planning to distinguish yourself from her? SHONTELLE: That’s the biggest challenge, because no matter what you do, you’ll be compared, whether it’s the same, completely different or not. She and I are friends and we’ve worked together on her album. But we really don’t think about it. And for me, I just tend to stay focused on what I’m doing. We know it’s a slow grind. The way I feel about life is that everyone has their moment, you just have to stick around long enough to actually be there when it happens. ESSENCE.com: So you were Beyonce’s opening act on her “I AM…Tour” in the UK, what did you learn from that experience? SHONTELLE: That was one of the most epic experiences of my career. Her having me on her tour was a big deal. It was kind of like a big rehearsal for the rest of my career. Touring with Beyonce, you’re performing in front of 50,000 to 60,000 people every night. She had a couple different opening acts. So, by the time I came on — right before her — the arena was packed. It was actually a great experience. To hear everybody out there singing “T-Shirt” and all my other songs, it’s like ‘wow they’re cooler than I thought.’ Her fans are really cool. And she was so cool. I will never forget the finale night of the tour, she went up on the stage and says, “Before I go, please give a round of applause for Shontelle. She’s been so amazing touring with me this whole time.” I was like ‘WOW! Did Beyonce just big me up in front of all her fans.’ I couldn’t believe it. ESSENCE.com: Tell us about your work with UNICEF’s PSA Awareness Campaign for Pakistan… SHONTELLE: I’m from Barbados and we’re a cricket nation. So Pakistan is a country we’re very close to and accustomed to dealing with and interacting with. I meet lots of Pakistani people, all the time, because they’re always in Barbados. Once UNICEF reached out and said they’re really being affected by the floods and kids don’t have anywhere to live, no food to eat, I was like, ‘I’m in!’ Just being able to do something that’s going to shed light on a negative situation, if I can bring any help at all, I’m there. Any work with UNICEF is always important to me. Especially when you deal with children, kids are my weakness.