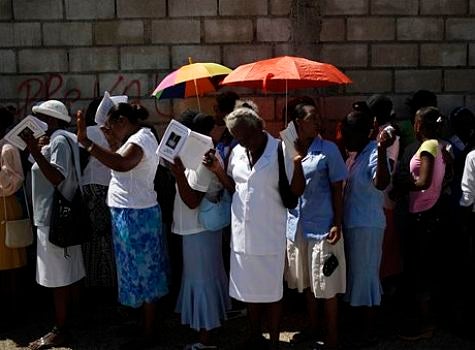 International relief groups in Haiti are voicing concerns about the growing violence against women, especially in relief camps, reports the New York Times. Malya Villard, director of KOFAVIV, a grass-roots organization that supports rape victims, says the organization has counseled 264 victims since the January 12th earthquake — three times the number of victims last year. Though fewer rape cases have been reported — 169 countrywide — more arrests have been maded since January than during the same time last year. The article profiles a 22-year-old woman who was the victim of rape and kidnapping. Her abductors took her to a damaged home where they raped her repeatedly and then demanded a $2,000 ransom from her family. Police and relief organizations say releasing thousands of prisoners onto the streets of Port-au-Prince has created an unsafe environment for women. Vallard calls it an “an ideal climate for rape.” With little light and security in Haiti’s 1,200 post-earthquake encampments, there is little to guard women from being assaulted. Yet even with the growing number of women being assaulted, few report the crime out of fear of retaliation. The U.S. State Department recently sent out a travel warning for Haiti, citing a growing number of killings and kidnappings. We pray for the women of Haiti. For more information on how you can help rape victims of Haiti, click here.